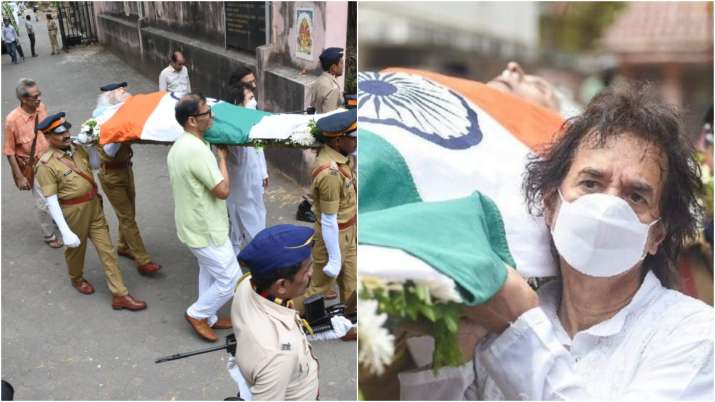 Santoor maestro Pt Shiv Kumar Sharma was on Wednesday cremated with full state honours in the presence of family and close friends. The 83-year-old musician died on Tuesday morning following a heart attack at his Pali Hill residence in Mumbai. The mortal remains of Sharma were kept for people to pay their last respects. Later, Sharma’s funeral was held at Vile Parle’s Pawan Hans Crematorium.

At the funeral, Sharma’s friend Zakir Hussain had an emotional moment. In pictures shred from the venue, tabla maestro and long-time collaborator Hussain is seen lending his shoulder to Sharma as he is carried for the last rites. One of the images shows Hussain standing by the burning pyre of his late friend.

Hussain was one of the pallbearers for Sharma. His emotional moments from Sharma’s funeral have been called poignant by the netizens.

Sharma and Hussain have collaborated for several stage shows, not just in India but abroad also. Several videos from their concerts were shared on social media after Sharma’s death. Sharma, one of India’s most well known classical musicians, was credited for taking santoor, the folk instrument from Jammu and Kashmir, to the global stage.