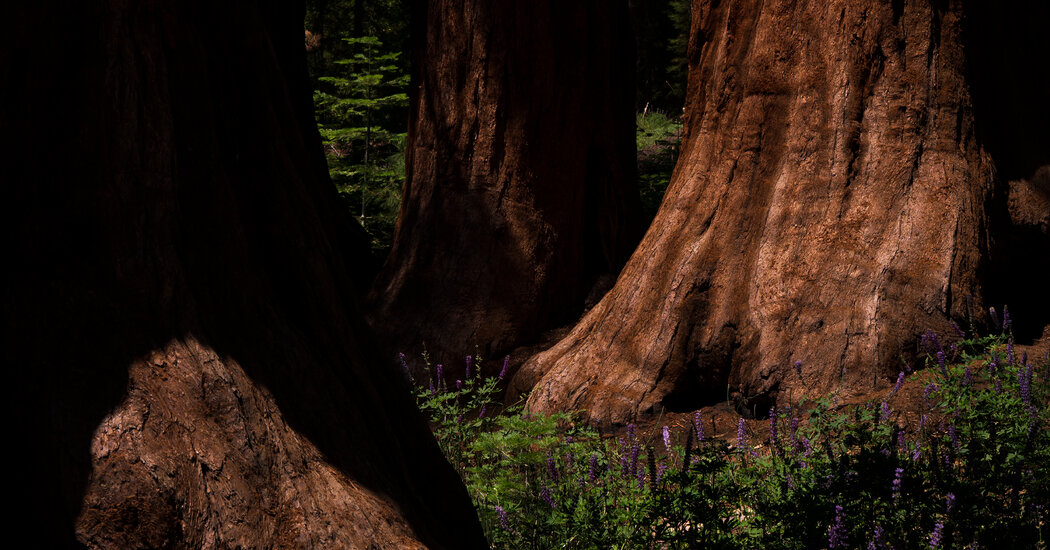 YOSEMITE NATIONAL PARK, Calif. — The towering trees of Yosemite National Park have long held a treasured place in the American psyche, whether the ancient and majestic sequoias, the Ponderosa pines with their snake-patterned bark, or the acorn-laden black oaks, the lifeblood of many Native American cultures.

It was with this legacy in mind that two top Yosemite park officials walked last week through a collection of tree stumps and explained to a visitor why they ordered chain-saw-wielding crews to fell hundreds of trees.

As she trudged past the remnant of a felled incense cedar, Cicely Muldoon, the superintendent of the park, acknowledged that the notion of cutting trees in Yosemite could be hard to explain to the public. “It hurts people’s hearts,” she said. “But we have to use every tool at our disposal to save the forests and to save the park and to restore a healthy ecosystem and to keep people safe.”

With more than 140 million trees killed in California by drought and plagues of beetles over the past decade — 2.4 million of them in Yosemite alone — forestry experts describe the state’s forests as wounded and extremely vulnerable. Now, as the state suffers another severe drought, Yosemite seems perennially under siege by fire and smoke.

In just the past month, the Oak fire and the Washburn fire have raged near and in the park, prompting evacuations, closing entrances and threatening the largest stands of sequoias, including the prized Mariposa Grove.

Ms. Muldoon says that more aggressive steps need to be taken than before to make the forests of Yosemite more resilient. But she and the park’s management will first have to prevail in court.

A judge this month temporarily halted the park’s biomass removal efforts, as the tree cutting was euphemistically known, in response to a lawsuit filed by an environmental group based in Berkeley, Calif., that argues that the park did not properly review the impacts. The thinning project covers less than 1 percent of Yosemite’s forests.

Whether or not the lawsuit proves successful, it is resonating well outside of the park’s boundaries by raising larger questions about how to manage forests in the age of climate change.

Increasingly, leading forestry experts are propounding a view dissonant to a public accustomed to the idea of preserving the country’s wild lands: Sometimes you have to cut trees to save trees. And burn forests to save forests, they say.

The polarization during the Trump administration between climate scientists and a president who downplayed rising temperatures and stressed the need for greater forest management, or “raking” as former President Donald J. Trump once called it, has passed for now. It has given way to what many experts say is a consensus among scientists and political leaders on the need to thin and burn forests more proactively.

“Most of us are absolutely convinced that this is not only a good thing to do, but is absolutely necessary,” said John Battles, a professor of forest ecology at the University of California, Berkeley, and a science adviser to the California Wildfire & Forest Resilience Task Force.

In this year’s budget, Congress designated nearly $6 billion toward wild land fire management programs, adding to the $5 billion earmarked for hazardous fuels reduction and other fire-related programs in the infrastructure law signed last year. Last month, lawmakers introduced the Save Our Sequoias Act, which would expedite environmental reviews required for thinning projects. Though the bill is bipartisan, it has drawn opposition from a coalition of environmental groups.

About a century ago, the National Park Service, which manages Yosemite, effectively made a promise to the American people that it would keep valued places looking “more or less like they always did,” said Nate Stephenson, a scientist emeritus in forest ecology for the United States Geological Survey. The act of Congress that established the National Park Service in 1916 called on parks to remain “unimpaired for the enjoyment of future generations.”

But, Dr. Stephenson added, “in this era of rapid and intense environmental changes, that promise is falling apart.”

Central to the thinking of scientists looking for ways to protect forests is research showing that the “natural state” of America’s wild lands was for millenniums influenced by humankind.

Decades of research have shown that the wilderness appreciated by early European settlers, as well as 19th century naturalists like John Muir, was often a highly managed landscape. Core samples from beneath a pond in Yosemite, retrieved in the way that scientists might bore deep into a glacier, showed centuries of layers of pollen and ash. The findings suggested a long history of frequent fires in Yosemite and buttressed the oral histories of Native American tribes who have long seen fire as a tool.

Other studies have shown how biodiversity flourishes after moderately hot fires, how meadows burst to life with dozens of species of flowers. Fire can reduce plant competition, increase water flow and kill off destructive insects. Some species, such as the giant sequoia, rely on the heat of a fire to dry out and crack open their cones to release seeds across the forest floor. But experts make a distinction between fires that are beneficial to the landscape and ones that burn so hot that they decimate it.

“Not all trees are good and not all fire is bad,” said Britta Dyer, a forest regeneration specialist at American Forests, a nonprofit organization that promotes the use of forests to slow climate change.

In the iconic Yosemite Valley, with its glacier-carved granite walls, vertiginous waterfalls and flowering meadows, Garrett Dickman, a forest ecologist at the park, is leading an effort to restore the area to what it looked like more than a century ago, when it was sculpted by native burning practices.

Mr. Dickman uses some of the earliest photographs and paintings of the valley to guide him in deciding whether trees need to be felled.

Photos by Carleton Watkins in the 1860s were viewed by Abraham Lincoln and helped convince the president of the need to declare Yosemite a protected public trust, a prelude to it becoming a national park. Mr. Dickman uses the same photos today.

“I will quite literally take the photo and look at where I think the view is and mark the trees that I think need to be removed to restore the vista,” Mr. Dickman said.

Live trees that are thicker than 20 inches are never felled, Mr. Dickman said. He has calculated that if he cannot wrap his arms around a tree it usually is too large to qualify for cutting.

Along the road that links the community of Wawona to the southern entrance of the park, crews have cleared 9,156 tons of trees and brush. Mr. Dickman calculates that of the approximately 350 truckloads that carried the logs and brush, only half a dozen were sent to a sawmill. The rest went to power plants that burn wood to make electricity.

The lawsuit against the park seeks specifically to stop the majority of the tree cutting and thinning. It was brought by the Earth Island Institute, a nonprofit organization based in Berkeley that has sued to stop other tree cutting projects. The lawsuit alleges that the park’s management did not follow review procedures laid out by the 1969 National Environmental Policy Act.

Chad Hanson, the director and principal ecologist for the John Muir Project, a subsidiary of the Earth Island Institute, said in an interview that the National Park Service is not being truthful about the tree removal, adding that he was among more than 200 experts who had signed a letter to President Biden and Congress expressing concern that commercial logging could be “conducted under the guise of ‘thinning.’”

Most experts involved in the debate say it is not a question of whether forest thinning should be allowed — but how much needs to be done.

Dr. Hanson, who is well known among conservationists and loggers for the frequency of his lawsuits, takes a more conservative view.

One of his main arguments is that a heavily thinned forest is more vulnerable to fire, not less, because the cooling shade of the canopy is reduced, as is the windbreak. Other experts say that while cutting down trees can in theory create drier, windier conditions, forests in the West are already very dry for much of the fire season. They also say that even if wind speeds do increase, it is rarely enough to overcome the benefits of having reduced the amount of vegetation that can burn.

Dr. Hanson agrees that within 100 feet of homes, selectively thinning seedlings and saplings, and even removing lower limbs on mature trees, is essential to create “defensible space.” But he argues that instead of lopping down large trees, forest managers should allow more wild land fires to progress naturally.

“Natural processes are meant to be the primary approach,” Dr. Hanson said, “Not chain saws and bulldozers and clear cuts.”

A number of environmental groups, however, counter that they support careful forest thinning, including Save the Redwoods League, a group that advocates for preserving redwood and giant sequoia forests, and the Nature Conservancy, an environmental nonprofit.

Daniel Swain, a climate scientist at the University of California, Los Angeles, and the Nature Conservancy, said it was “exhausting” having to confront Dr. Hanson’s flurry of arguments and litigation. He added, “It is a waste of time.” Other experts have published critiques of Dr. Hanson’s methodology.

Dr. Hanson’s latest lawsuit has also infuriated some local political leaders, including Tom Wheeler, a supervisor in Madera County who represents the Yosemite area and who at a recent town hall meeting unleashed a blizzard of expletives describing Dr. Hanson.

A former logger and racecar driver, Mr. Wheeler’s voice was filled with urgency as he pointed to multiple forests in the Sierra Nevada that were resilient to wildfires because timber had been selectively removed and brush cleared. Mr. Wheeler is against clear cutting forests but says some have become so overgrown that they are kindling ready to ignite.

“Look at that and tell me how that’s going to burn,” Mr. Wheeler said standing next to a thick stand of conifers, many of them denuded of their needles. “That’s going to be so damn hot you wouldn’t be able to stand right here.”

Large wildfires have been so common around Yosemite in recent years that visitors driving into all four entrances see the charred remnants of burned forests. Ms. Muldoon, the Yosemite superintendent, said the fires are often so hot that firefighters compare it to battling hellish storms.

“We don’t send people out to fight hurricanes and that’s what it’s starting to feel like for firefighters,” she said.

It is the thickening of the forest through generations of fire suppression that now requires the cutting and hauling of thousands of trees, she said.

And what about leaving the park “unimpaired” for future generations?

“It’s a tricky word,” she said. In the early years of the park service, Ms. Muldoon said, unimpaired would have meant “leave it exactly as it is out there, don’t touch anything.”

“But if we’ve learned anything it’s that we have been touching these lands forever — humanity has — and doing nothing is really doing something.”

- Advertisement -
This post contains affiliate links. If you use these links to buy something we may earn a commission. Thanks.”
Facebook
Twitter
Pinterest
WhatsApp
Previous articleBoycott Flipkart trends as Sushant Singh Rajput fans slam ‘depression’ T-shirt
Next articleKGF Chapter 2 completes 100 days in theatres Yash army celebrates with photos and videos