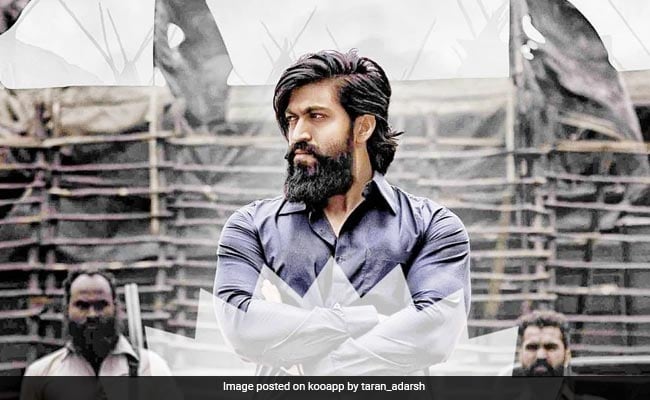 Yash in a still from KGF 2. (courtesy: taran_adarsh)

Calling Yash’sKGF: Chapter 2 a hit would clearly be an understatement. The film is the biggest opener in India, reported Bollywood trade analyst Taran Adarsh. He shared a post on Koo, in which he wrote: “KGF 2 creates history, biggest day 1 total… KGF 2 has demolished opening day records of War and Thugs Of Hindostan.” The film managed to collect a whopping sum of Rs 53.95 crore on its opening day. It broke the record of War , which collected Rs 51.60 crore on its opening day, and Thugs Of Hindostan with Rs 50.75 crore. The film also crossed the business of the first installment of KGF. The first part had managed to collect Rs 44.09 crore total. Taran Adarsh wrote: “Kudos to Excel [Ritesh Sidhwani, Farhan Akhtar) – AA Films [Anil Thadani] for their vision, backing the first part way back in 2018… Now awaiting KGF 3.”

Other than Kannada superstar Yash, KGF 2 also features Sanjay Dutt and Raveena Tandon. The film opened in theatres on Thursday.

K.G.F. Chapter 2 opened to mixed reviews from film critics. In his review for NDTV, film critic Saibal Chatterjee gave it 2 stars out of 5 and he wrote: “It is designed to pound the audience to submission. It is only for Yash fans and for those who feel an assault on the senses is a form of cinema. But if you love your eardrums and have had your fill of the super-heroic exploits of an underdog-turned-top dog hero, K.G.F. Chapter is best avoided. It whips up plenty of heat and dust but yields no gold.”