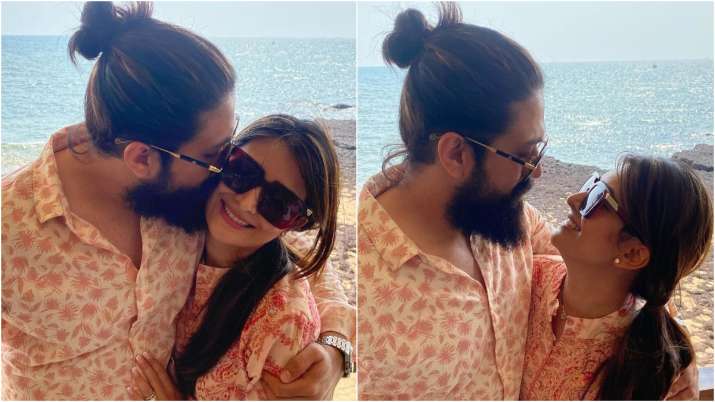 ‘Rocking Star’ Yash has been on a vacation with his wife Radhika Pandit and their two kids after the release of much-loved KGF: Chapter 2. The movie has been breaking box office records ever since it hit the screens on April 14 and is already among the top-grossing Indian films of all time. Radhika has been sharing glimpses of their getaway on social media and in a recent picture, Yash is seen planting an affectionate kiss on his wife’s cheek by the beach.

Sharing the couple’s lovey-dovey pics on Instagram, Radhika wrote, “Looking through coloured glasses (sic).” Yash is seen in a cool, printed shirt and sunglasses and Radhika is seen in a floral top. The couple’s adorable moments have been getting love from the fans.

Earlier, as KGF: Chapter 2 ruled over the fans’ hearts, Yash shared a video thanking his fans for the reception the movie has been receiving. He says in the video clip, which is shared from his vacation, “Thank you is not big enough. I would like to say that we are very grateful. I hope you are enjoying the film and continue enjoying it. At the end, I would like to say that guys your heart is my territory.”

Yash was also joined by KGF director Prashanth Neel and producer Vijay for a small celebration party on the movie’s huge success. The makers celebrated the glorious success of their magnum opus KGF: Chapter 2 with a very private party, with only a few teammates, gathered to cut the cake.

The pictures of Prashanth Neel, hero Yash, and Hombale Films producer Vijay, celebrating the unanimous success of the movie, have been shared with the media. ‘KGF. This is only the beginning’ was engraved on the cake.