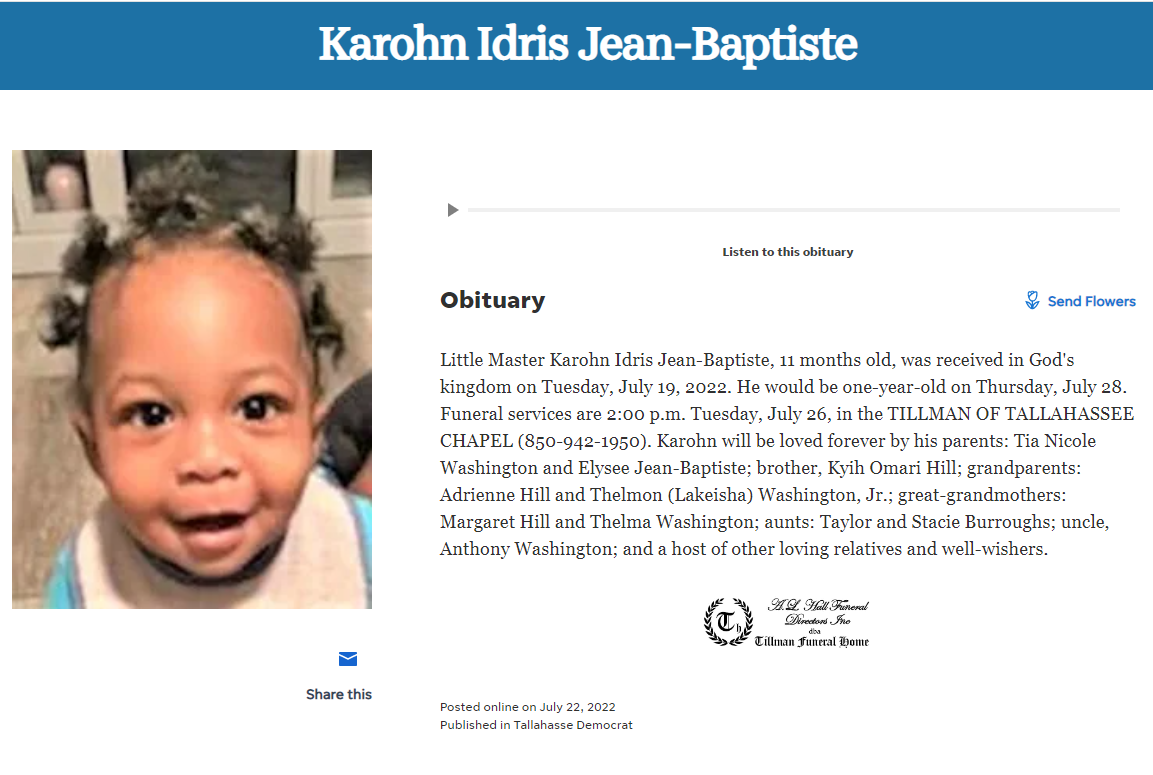 While at work on July 19, Tia Washington surfed the web on her phone looking for an application to create a photo collage of her 11-month-old son, Karohn Jean-Baptiste.

Around noon, she even texted her ex-husband to ask if he remembered how much Karohn weighed at birth.

As Washington was collecting photos of Karohn ahead of his first birthday – some of which she snapped earlier that morning – he was in the backseat of her SUV only a short walk from the entrance of Big Bend Hospice, where she was working.

More than six hours after starting her shift, the 28-year-old mother found her son unresponsive; strapped in the car seat.

The tragic timeline that led to the fatal mistake appeared in a probable cause affidavit that chronicled the events before and after the baby’s death, which led to Washington’s arrest Friday on a charge of aggravated manslaughter of a child.

On Monday, she pleaded not guilty, according to court records.

“This was a hard case,” said State Attorney Jack Campbell, adding that Florida law makes it a crime to leave a child unattended in a vehicle for more than 15 minutes. “This was an absolute tragedy, and I have no evidence that Mrs. Washington wanted to harm her child.”

Following her first appearance, she was released on bond Saturday. Her attorney, Adam Komisar, declined to comment on the case.

A typical day ends in tragedy

According to court records, Washington is divorced and has full custody of her older child and had majority custody of Karohn. Washington’s ex-husband had the baby for three days every other week.

On weeks when he had custody, Washington would hand off the baby at Publix on Sunday evening. She would then pick him up from day care at Purposeful Beginnings Learning Center, 2521 Mahan Drive, on Tuesday evening.

During the week of July 19, Washington had custody of the baby.

She left her house in northeast Tallahassee at 7:03 a.m. to drop off her 8-year-old at Kate Sullivan Elementary School, 927 Miccosukee Road, for day camp.

While carrying the baby, she walked her 8-year-old child to the cafeteria — as she does every day.

After pulling out of the Kate Sullivan parking lot, she drove straight to her job at Big Bend Hospice, just five minutes away, instead of Purposeful Beginnings day care as was the usual routine.

She backed into a parking space, grabbed her purse in the front seat and went inside at approximately 7:37 a.m.

“(Washington) did not recall hearing noise from (her son) and stated she forgot that Karohn was in the back seat of her vehicle,” a probable cause affidavit said. “(She) reported going directly to work … not having second-guessed whether (he) was with her that day.”

Tragic discovery made during lunch break

After a few moments inside her SUV, she turned around and saw the baby in the backseat.

Less than a minute later, Washington burst through the front doors of the hospice facility and collapsed on the floor, crying hysterically, court records say. A nurse at the facility heard the screams and followed them to Washington. Among the indiscernible words, she heard “baby” and “car.”

She ran outside and spotted the back door of Washington’s SUV open and, as she approached, she saw the baby unresponsive in the back seat.

Out of the car seat she lifted Karohn — whom she described to police as “very hot to the touch” — and handed him to another female employee standing nearby.

The baby was brought into a large conference room, where the two hospice workers removed his onesie and performed CPR. Meanwhile a bystander called 911.

Within minutes, Leon County EMS arrived and officially pronounced that the baby was dead.

His first birthday would have been Thursday, July 28.

A forensic specialist used a thermometer provided by nursing staff at Big Bend Hospice and recorded the baby’s temperature to be 107.2 degrees Fahrenheit at 3:45 p.m.

He had been left in the untinted SUV for 6 hours 25 minutes. The medical examiner determined the cause of death to be hyperthermia.

The same specialist noted that Karohn appeared “well-nourished, groomed, and free of any marks that indicative of physical abuse,” court records state.

Washington’s ex-husband told police “he was not aware of any other times Tia may have forgotten Karohn in the car,” an affidavit said.

None of the evidence, including years of phone records, suggest Washington intended to kill her 11-month-old son, police said.

“Although it does not appear Tia intentionally left Jean-Baptiste in the car, she neglected to maintain sufficient conscientiousness and implement precautionary measures to ensure the health and safety of her child,” court records said.

The state attorney told the Democrat he would consider leniency and mercy when resolving the case.

“I totally understand the public struggling with (this case),” he said. “Candidly, I’m a father and I struggled with it too.”

Never miss a story: Subscribe to the Tallahassee Democrat using the link at the top of the page.