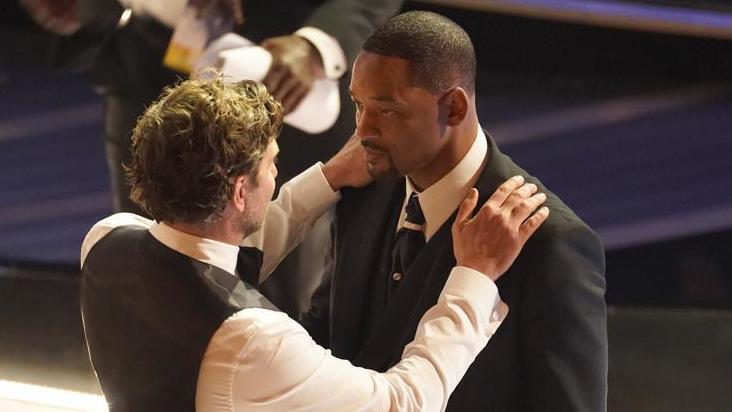 Bradley Cooper, left, talks to Will Smith after slapping Chris Rock at the Oscars.

Bradley Cooper, left, talks to Will Smith after slapping Chris Rock at the Oscars.

The Academy of Motion Picture Arts and Sciences said actor Will Smith could face suspension, expulsion or other consequences for having gone on stage during the Oscars ceremony to slap comedian Chris Rock after a joke he made about Jada Pinkett Smith’s hair.

In a statement, the Academy said that Smith was asked to leave the ceremony and refused. Shortly after the incident, Smith went on to accept his award as Best Actor for his role in the film “King Richard.”

The Academy said it was “a deeply shocking, traumatic event to witness in-person and on television.”

“Mr. Rock, we apologize to you for what you experienced on our stage and thank you for your resilience in that moment. We also apologize to our nominees, guests and viewers for what transpired during what should have been a celebratory event,” the Academy said.

When it meets on April 18, the Academy’s board of governors may decide on the consequence for Smith’s behavior.

On Instagram the day after the Oscars, Smith publicly apologized to Rock.

“I was out of line, and I was wrong,” Smith wrote.

The actor also apologized to the family of Richard Williams, father of tennis superstars Venus and Serena Williams, whose stories were told in “King Richard.” Their Oscar moment was overshadowed by the altercation and was one of the most dramatic and unplanned events in Academy Awards history.

Jada Pinkett Smith has been open about dealing with hair loss due to the autoimmune condition alopecia, but Smith wrote that a joke about her medical condition was “too much to bear and I reacted emotionally.” He wrote that he was embarrassed by his behavior and regretted that he “stained what has been an otherwise gorgeous journey for all of us.”

Meanwhile, Chris Rock is returning to the stage to perform at Boston’s Wilbur Theatre before officially kicking off his “Ego Death World Tour.”