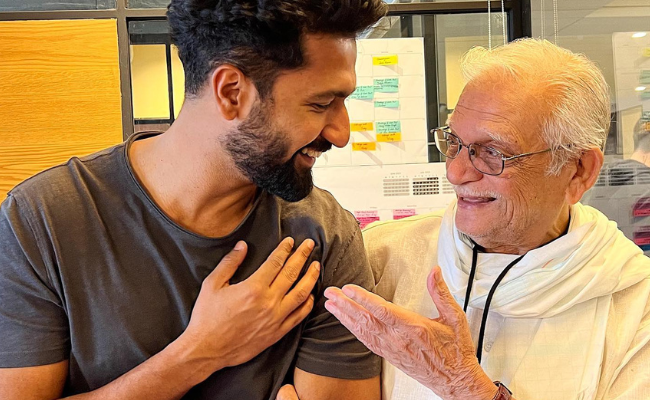 When Vicky Kaushal Met Gulzar. The Actor’s Smile Says It All

Gulzar is one of the most celebrated names in the Indian film industry. As a director and lyricist, Gulzar is the man behind some of the most seminal works in Hindi cinema and he continues to be a dream collaborator for artists across all age groups. Now, actor Vicky Kaushal, who is working with Gulzar’s daughter, director Meghna Gulzar in Sam Bahadur, has shared an image with the legendary lyricist. In the candid photo, Vicky is sharing a laugh with Gulzar. Vicky Kaushal just dropped a white heart emoji in the caption and tagged Meghna in the post.

Vicky Kaushal began prep on the Meghna Gulzar film last week. Sam Bahadur is based on the life of the legendary Chief of the Army Staff, Field Marshal Sam Manekshaw. The actor shared a post announcing the same on social media. He shared a photo that features a bound script of the biopic along with a few black and white pictures of the Field Marshal as well as a diary and pen. In the caption, Vicky Kaushal wrote, “Here we go… Prep starts #SAMBAHADUR,” tagging Meghna Gulzar and RSVP Movies, which is producing the film.

Last year in December, Vicky Kaushal shared a photo with director Meghna Gulzar, Sanya Malhotra and Fatima Sana Shaikh. In the caption, He wrote: “It’s a very special day for us as we celebrate our director Meghna Gulzar’s birthday and welcome the leading ladies Sanya Malhotra as Silloo Manekshaw and Fatima Sana Shaikh as Smt. Indira Gandhi to the Sam Bahadur family!”

Vicky Kaushal and Meghna Gulzar have previously collaborated on Raazi, which was headlined by Alia Bhatt. The lyrics for the songs in Raazi were penned by Gulzar.

- Advertisement -
Facebook
Twitter
Pinterest
WhatsApp
Previous articleHow to spot swimmers in trouble at pool, beach, ocean
Next article10 of the Easiest Countries to Emigrate to When You’ve Had Enough