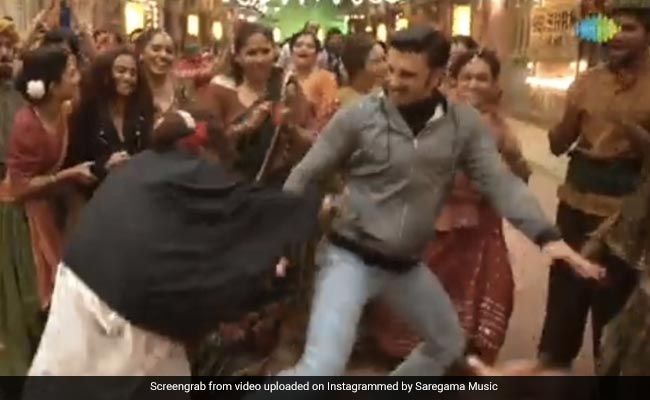 When Ranveer Singh Joined Alia Bhatt On The Sets Of Dholida

Alia Bhatt and Ranveer Singh in a still from Dholida. (courtesy YouTube)

The makers of Gangubai Kathiawadi shared the making of the song Dholida on Tuesday and it a visual delight. The song features Alia Bhatt aka Ganguabai dancing with all her heart. The song has been composed by Sanjay Leela Bhansali, it has been beautifully sung by Janhvi Shrimankar and Shail Hada and the lyrics are by Kumaar. In the video, Alia Bhatt reveals that she was bruised during the making of the song as she had to spin and dance incessantly. At the end of the video, Alia is joined by Ranveer Singh, who co-starred with her in Gully Boy and they will also feature together in Rocky Aur Rani Ki Prem Kahaani.

Check out the the video here:

Ranveer Singh has starred in 3 of Sanjay Leela Bhansali’s projects: “Padmaavat,” Bajirao Mastaani and Ramleela. “>Gangubai Kathiawadi showcased the journey of the real life woman, a sex worker in Mumbai’s Kamathipura, who was pushed into prostitution at an early age.

In terms of work, Alia Bhatt  has a super busy schedule ahead. The actress had two back-to-back releases this year – SS Rajamouli’s RRR and Sanjay Leela Bhansali’s Gangubai Kathiawadi. Earlier this week, she flew out of Mumbai for the shooting of the Hollywood film Heart Of Stone co-starring Gal Gadot. She will next star in Darlings, which she is co-producing with Shah Rukh Khan. She will also be seen in Farhan Akhtar’s Jee Le Zaraa with Priyanka Chopra and Katrina Kaif and Karan Johar’s Rocky Aur Rani Ki Prem Kahani with Ranveer Singh. Her line-up of films also includes Ayan Mukerji’s Brahmastra with husband Ranbir Kapoor.