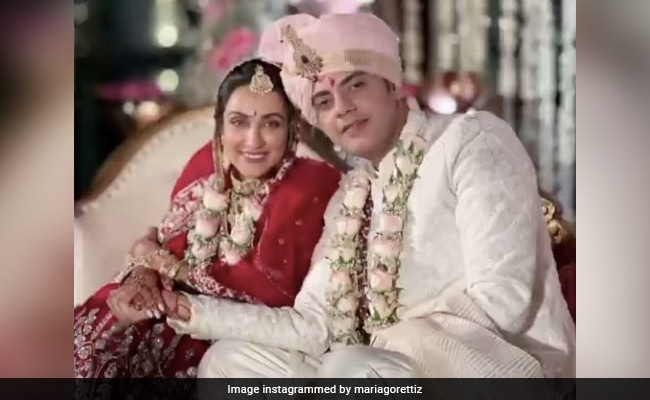 Popular VJ and actor Cyrus Sahukar married longtime girlfriend Vaishali Malahara in a private ceremony in Alibaug on Friday. The actor’s friends shared pictures from the festivities on social media. The guest list at the wedding included close friends and family members – Mini Mathur, Kabir Khan, Maria Goretti, Cyrus Broacha, Shruti Seth, Samir Kochhar, music composer Ankur Tewari, Gaurav Kapur and Yudhishtir Urs, among others. For the wedding, the bride picked a bright red lehenga, while the groom wore an off-white sherwani with a pink turban. The couple reportedly dated for six years before getting married.

Cyrus Sahukar’s friend Samir Kochhar posted a photo with the newly married couple on Instagram and he wrote in his caption: “Wishing the lovely couple the happiest life up ahead… what a wedding it was!! Loads of love from Radhika Kochhar and me #vairus.”

Sharing another picture from the wedding, Samir Kochhar wrote: “Celebrations in full swing.”

Cyrus Sahukar, a popular VJ, hosted several TV shows like MTV Bakra Gag, Chill Out, Spelling Bee and India’s Got Talent, among many others. He played the lead in the popular Amazon Prime web-show Mind The Malhotras, in which he co-starred with fellow MTV VJ Mini Mathur. He also starred in shows such as Kaun Banegi Shikharwati and Potluck.

Cyrus Sahukar has also been a part of films like Delhi 6, Aisha, Rang De Basanti and Khoobsurat, to name a few. Vaishali Malahara was last seen in 2019 movie Upstarts, alongside Priyanshu Painyuli.