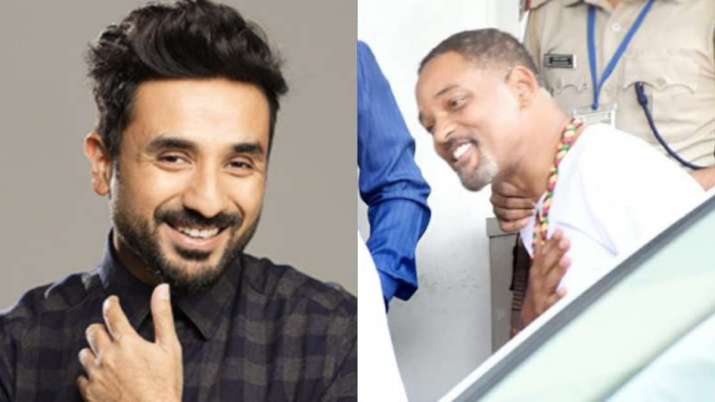 Hollywood star Will Smith’s recent visit to India weeks after slapping Chris Rock at Oscars 2022 has caught everyone’s attention. Like several netizens, actor and stand-up comedian Vir Das, too, commented about the same. Taking to Instagram, Das welcomed Smith with a joke, indirectly making a reference to Indian comedians who have faced lawsuits for hurting the sentiments of people with their acts. In fact, in 2021, Das landed in a legal soup over his controversial ‘I come from two Indias’ performance. “Will Smith is in India? Good. He can learn to stop slapping comedians with his hands and start slapping them with legal cases,” Das posted.

Das’s “welcome note” for Smith garnered a lot of reactions from social media users. “LOL,” a netizen commented. “Hahahha savage,” another one wrote. Take a look

For the unversed, while presenting the best documentary feature award at the 2022 Oscars, comedian Chris Rock made a joke about Smith’s wife Jada Pinkett Smith’s shaved head. Rock said he couldn’t wait to see Pinkett Smith, who has alopecia areata, star in ‘G.I. Jane 2’ which led Smith to go up on stage and slap Rock. Smith returned to his seat and shouted, “Keep my wife’s name out of your fu**ing mouth!” After Oscars slapgate, Will Smith in India to meet Sadhguru

A few minutes after the incident, Smith was announced Best Actor at the 94th Academy Awards. While accepting his first-ever Oscar for best actor (leading role) in ‘King Richard’, Smith apologised to the Academy and fellow nominees but did not mention Rock. However, after receiving backlash for his disorderly behaviour, Smith issued an apology to Chris Rock and Academy on his social media handle.

On March 29, there was a short virtual meeting between Smith, Rubin and Academy CEO Dawn Hudson, initiated by Smith. A few hours later, Smith announced his resignation from the Academy of Motion Picture Arts and Sciences, claiming he “willfully accept any and all consequences for my conduct.” ALSO READ: Abhay Deol recreates Chris Rock-Will Smith’s Oscar incident, says ‘I’d have stood up and…’

The Academy then moved up its meeting, where it banned Smith from its events for the next 10 years. And interestingly, on April 23, he was spotted at a private airport in Mumbai. He was seen dressed in an oversized white T-shirt that he teamed with the same coloured pants over which he donned knee-length black shorts. The viral photos also showed a ‘mala’ around his neck.

It is believed to be Smith’s first public appearance since his Oscars controversy. The purpose of his trip has not been publicised.