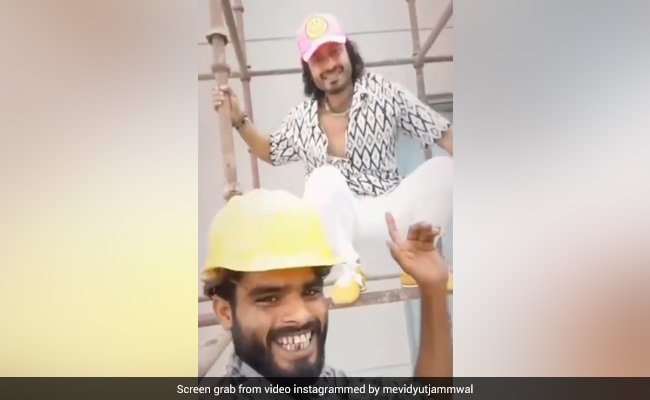 Vidyut Jammwal in a still from the video. (courtesy: mevidyutjammwal)

Vidyut Jammwal’s latest video will give you much-needed weekend motivation. No, it isn’t about Vidyut performing some jaw-dropping action sequences. Here, he is having a casual conversation with a construction worker. It seems the clip was shot on the sets of one of his projects. When Vidyut asks “kya kya dekha aapne [What all you have watched]”, the person, who is standing on a temporary set up, says, “Aapki action films dekhi ha. Aap kafi achi fight karte ho. Stunt bhi acha karte ho [I have watched your film. You are quite good with the action sequences.” To this, the actor quickly replies, “Aapke jada stunt koi nahi karta hai films main. [No one performs stunts like you in films.] ” And, then, Vidyut decides to take a picture with the worker. He steps out of the balcony and goes all the way to the man waiting for him. The worker couldn’t thank Vidyut enough for giving him this opportunity. In the caption, Vidyut wrote, “Normal is boring…” The hashtag went like this,  “The Real Stunt Men.”

The video has garnered a lot of attention on social media. “Man with golden heart,” was the sentiment. A few called him “amazing” and “inspiring”.

Vidyut Jammwal never fails to amaze us with his out-of-the-box social media posts. Proof, did we hear? Look at his training video from the Himalayas. Here, Vidyut, who is known for his love for martial arts, is seen practising Kalaripayattu. For the sidenote, the actor wrote, “Kalaripayattu says…There is a Yogi within waiting to rise.”

Vidyut Jammwal will be next seen in Khuda Haafiz: Chapter II – Agni Pariksha. The film is set to release on July 8. The film, directed by Faruk Kabir, is a sequel to Khuda Haafiz.  Shivaleeka Oberoi and Dibyendu Bhattacharya are also part of the film.