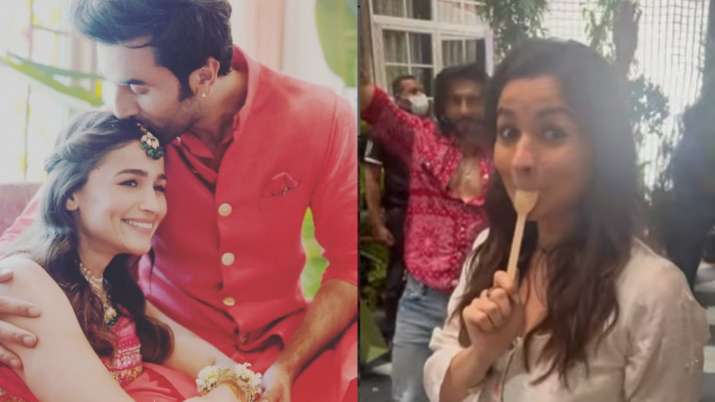 
Video: Alia Bhatt has wrapped up the shoot of her upcoming film Rocky Aur Rani Ki Prem Kahani and Karan Johar has treated all her fans to a video of hers. In the video, the actress is seen with the cast and crew of the film as she enjoys her last day on the sets. Also, seen with her is Ranveer Singh, who recently broke the Internet with his nude pics. Karan, however, is not seen in the clip as he is recording it.

As Alia prepares to leave the set, the was seen cutting the cake and for the farewell, Karan plays her husband Ranbir Kapoor‘s song Channa Mereya from his film Ae Dil Hai Mushkil. Alia joins in the celebrations and dances to the song. Sharing the video, Karan wrote, “A talkie wrap on my Rani! Watch Rocky cheer her on ! And excuse my excited and crazy camera moves ! Rani ne kaam kar liya on this prem kahani Ab Rocky tu bhi aaja wrap ke maidan me! #rockyaurranikipremkahani @aliaabhatt @ranveersingh ! Song selection is from my emotional library!”

Five years after ‘Ae Dil Hai Mushkil’, Karan Johar has once again taken the director’s chair for his upcoming comedy drama titled ‘Rocky Aur Rani Ki Prem Kahani’. Starring a stellar line up of actors in the form of Ranveer Singh and Alia Bhatt, who play the leads supported by veterans like Jaya Bachchan, Dharmendra and Shabana Azmi, the film is all set to be released on February 10, 2023.

While Farah Khan will do the choreography of songs, Manish Malhotra has taken the onus of costumes design. Saif Ali Khan and Amrita Singh’s son Ibrahim Ali Khan is working on the film as one of the assistant directors. The film is written by Shashank Khaitan (Dhadak, Humpty Sharma Ki Dulhania, Badrinath Ki Dulhania and Ajeeb Daastaans), Ishita Moitra and Sumit Roy and produced under the banner of Dharma Productions.

Viral Video: Priyanka Chopra is high on tequila as she parties with Nick Jonas and friends | Watch ​