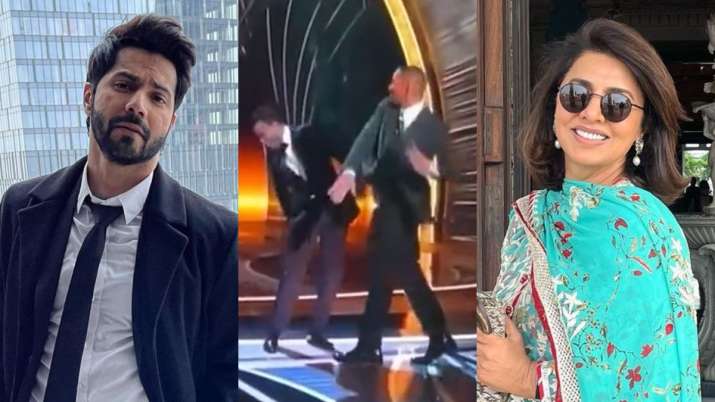 After actor Will Smith smacked comedian Chris Rock in the face during the 94th Academy Awards, the internet has been flooded with all kinds of reactions from all over the world. For the unversed, Smith slapped Rock onstage after he got miffed at the latter’s joke directed at his wife Jada Pinkett Smith. After an uproar on social media by Hollywood celebrities, Bollywood stars, too, took to their respective social media handles and reacted to the viral incident.

Varun Dhawan shared the clip on his Instagram Story and wrote, “Wow didn’t expect that also @chrisrock has a chin.”

Neetu Kapoor shared a picture of the much-talked-about moment on her Instagram Story. She wrote, “And they say women can never control their emotions.”

Sophie Choudry shared her reaction on Twitter, writing, “Violence is never the way but cracking jokes about someone’s medical condition should not be acceptable either. This was supposed to be a career high for one of my favourite artists for a superb performance. Instead he’ll be remembered for this crazy incident.”

Several Hollywood stars including Cardi B, Maria Shriver, Trevor Noah expressed their reactions to the onstage scuffle through their social media handles. Many in the ceremony also looked stunned by the altercation.

Rock appeared on stage to present the Oscar for documentary feature and he then made a joke about Jada-Pinkett Smith (Will Smith’s wife) being in ‘G.I. Jane’ because of her shaved bald head. Last year, Jada Pinkett Smith had announced that she shaved her head after struggling with alopecia.

Initially, Smith was laughing but Jada clearly looked affected by the joke. Smith then took to the stage to punch Rock. A few minutes after the incident, Smith was announced Best Actor at the Oscars. And during his acceptance speech, he apologised for his behaviour.

The 94th Academy Awards took place at the Dolby Theatre in Los Angeles on Sunday.