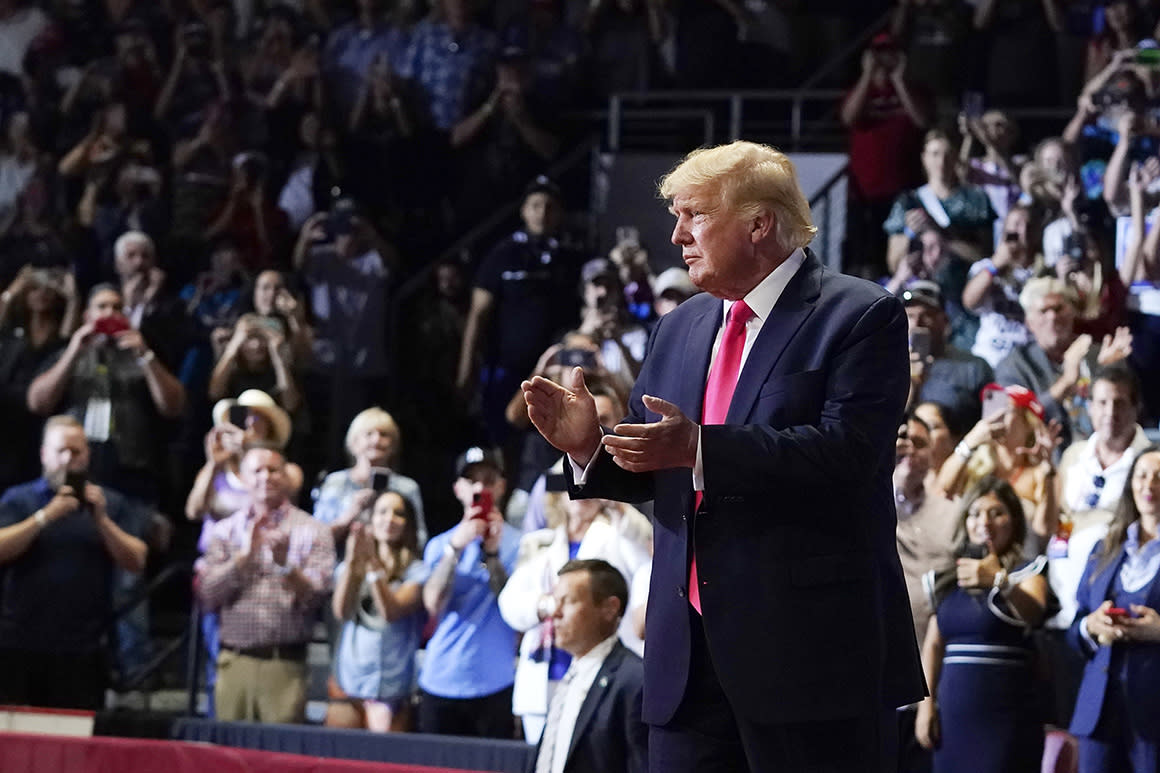 PRESCOTT VALLEY, Ariz. — It was billed as a split screen proxy war in the desert: Donald Trump versus Mike Pence in a midterm election skirmish that would provide an early indication about the future of the GOP.

The Republican Party landscape, in Arizona at least, remains tilted sharply towards Trump. And those who came to watch the former president speak seemed to know it.

They rallied on Friday in a bunting-clad arena wearing “Still my president” T-shirts, offering wild conspiracies about the last election and certainty that Trump would win the next one.

For them, Pence — and every vestige of the old, establishment wing of the GOP — is in the past.

“He was a good guy,” one attendee said.

“I don’t have an opinion on [Pence],” said another, who was eager to persuade Trump to “head up a liquidation of the federal government” if elected.

Leaving the rally with her 11-year-old grandson — and stopping for a T-shirt that was too big for him, but that he said he could tuck in — Georgianna Bruso said she “didn’t even know” Pence was in the state.

Pence was, indeed, there — having come to the state to support Karrin Taylor Robson, who is running for the Republican nomination for governor against the Trump-endorsed Kari Lake, who still insists, falsely, that Trump won the election in 2020.

But even the setting of the stop underscored how tilted this “proxy-battle” would be.

The former vice president appeared with Robson in Maricopa County, where Trump supporters conducted an “audit” of the last election that was derided by honest observers as a farce.

It’s the largest county in Arizona, the state where Ron Watkins, a celebrity in the QAnon conspiracy world suspected of being Q, is running for Congress.

Earlier this week, the state Republican Party censured Arizona’s Republican state House speaker, Rusty Bowers, for testifying to the Jan. 6 committee about Trump’s efforts to overturn the election. Walt Blackman, a Republican state lawmaker running for Congress, recently made headlines for his suggestion that abortion is tied to efforts to exterminate Black people.

In parts of Arizona, said Chuck Coughlin, a veteran Republican strategist based in Phoenix, “you can say some crazy shit” and still be viable.

Or win a statewide party primary.

To Trump’s supporters, it doesn’t matter how much damage was inflicted on the state party during his tenure. Republicans lost two Senate seats and a presidential race for the first time since 1996.

It was the prospect that he would run again that they were cheering when they arrived. And it wouldn’t change Trump’s supporters’ minds about him if his preferred candidate for governor, Lake, loses to Pence’s choice in the primary on Aug. 2.

Some said they wouldn’t believe it if she did. Lake herself has suggested she might not accept the results of her election — a line derived from the Trump playbook.

In the run-up to Trump’s rally with Lake, Stan Barnes, a former state lawmaker and longtime Republican consultant, described the Trump and Pence appearances in Arizona as “like some sort of celestial planet lineup that you witness every millennium … That’s what it feels like on the ground in Arizona.”

What was happening, he added, was a slow-motion, real-time “tearing of the fabric in the Republican Party that’s there for us to see. We have Donald Trump doing his thing with his candidate … The voters in the Republican Party in Arizona may not be aware of this yet, but they’re not just choosing a candidate to represent the party in the general election. They’re choosing the actual direction of the party.”

But when asked if Trump could come out a loser either way, Barnes said, “No, I don’t think so.”

Robson, the wealthy real estate developer and former member of the state’s board of regents, has refused to say that the 2020 election was stolen. But in a nod to Trump, she has said she doesn’t think the election was fair. She has drawn closer to Lake, the early frontrunner in the primary, not by criticizing her for falsehoods about the 2020 election — a centerpiece of Lake’s campaign — but by depicting her as an inauthentic conservative.

On Friday, she criticized Lake for donating to Barack Obama, while Pence, appearing alongside her, said, “Arizona Republicans don’t need a governor that supported Barack Obama and Hillary Clinton.”

For the most consequential schism in the GOP — between its pro-Trump and pro-democracy wings — that isn’t much of a litmus test.

“Has it been a full-throated defense of the election that was run in the state of Arizona in 2020?” asked Bill Gates, a Republican Maricopa County supervisor. “No, that’s not what she’s done. I think she’s thrown some red meat to folks, but she has purposefully not gone all in and off the deep end.”

Even that, he said, “is important, because I think the majority of candidates in our party have.”