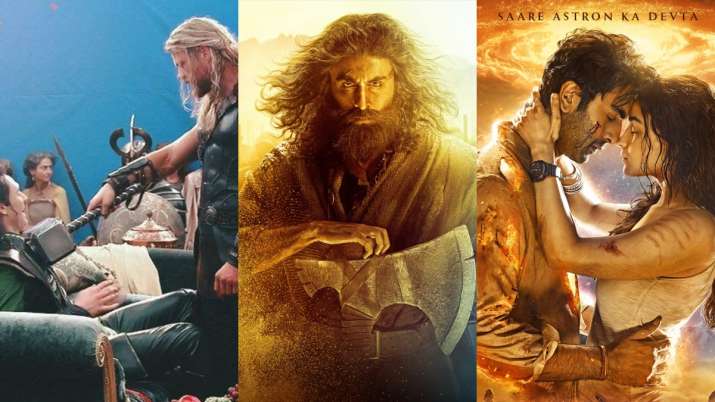 
Ranbir Kapoor and Chris Hemsworth are both playing axe-wielding, larger-than-life quintessential big-screen heroes in the hugely anticipated event films ‘Shamshera’ and ‘Thor: Love & Thunder’ respectively. Ranbir and Chris both have huge appeal in the country and here’s a development that will get fans of both these actors excited! The movie ‘Thor: Love & Thunder’ is all set to hit the theatres in India on July 7. And there’s a big treat for Indian fans as the trailers of ‘Shamshera’ has been attached to it. Not only ‘Shamshera’, but Ranbir-Alia starrer ‘Brahmastra’ trailer has also been attached to the film. Apart from these two, audiences will also see a glimpse of the upcoming Hollywood film ‘Avatar: The way of water’ when they go to watch ‘Thor’.

Rohan Malhotra, Vice President Of distribution further revealed, “Shamshera and Thor: Love & Thunder are two of the biggest event movies releasing this month. Both movies boast of larger-than-life, axe-wielding heroes who have got everyone talking. Exhibitors across India are charged by the audience reactions to Shamshera and there is a craze amongst movie buffs to catch this big-screen spectacle on the biggest possible screen.”

He added, “YRF wanted to present the trailer of the most anticipated Hindi film of the season in cinemas with a befitting film that has truly captured the imagination of fans and audiences. So, for us, it was a no-brainer to devise a strategy where the trailer of Shamshera plays out when cine-goers go to watch the most anticipated English film of the season Thor Love & Thunder! We are hoping that the release weekend of Thor: Love & Thunder will see disruptive conversation amongst people as they will also get to see the new cinematic world of Shamshera created for the big screen by auteur Karan Malhotra.”

‘Shamshera’ marks the comeback of Ranbir Kapoor to the big screen after a hiatus of four years. The high-octane, adrenaline-pumping entertainer is set in the 1800s in the heartland of India. In the film, Ranbir Kapoor plays the protagonist ‘Shamshera’ who is pitted against Sanjay Dutt who is playing an evil, merciless, cold-hearted brute force of nature, Shuddh Singh.

Directed by Karan Malhotra, this action extravaganza has been produced by Aditya Chopra and is set to release in Hindi, Tamil, and Telugu on July 22, 2022.

‘Brahmastra’, on the other hand, will hit the theatres on September 9. ‘Brahmastra – Part One: Shiva’ is one of Bollywood’s most ambitious projects. Apart from Ranbir, the film has a stellar ensemble cast of Alia Bhatt, Amitabh Bachchan, Mouni Roy, and Nagarjuna Akkineni.

‘Avatar: The way of water’ will hit the theatres on December 16 and will release in India in 5 languages – English, Hindi, Tamil, Telugu, Kannada, and Malayalam. The film stars Michelle Yeoh, Kate Winslet, and Zoe Saldana in lead roles.

- Advertisement -
Facebook
Twitter
Pinterest
WhatsApp
Previous articleNew Insights Into Trump’s State of Mind on Jan. 6 Chip Away at Doubts
Next articleSchool dinners: Beef off the menu as costs rise