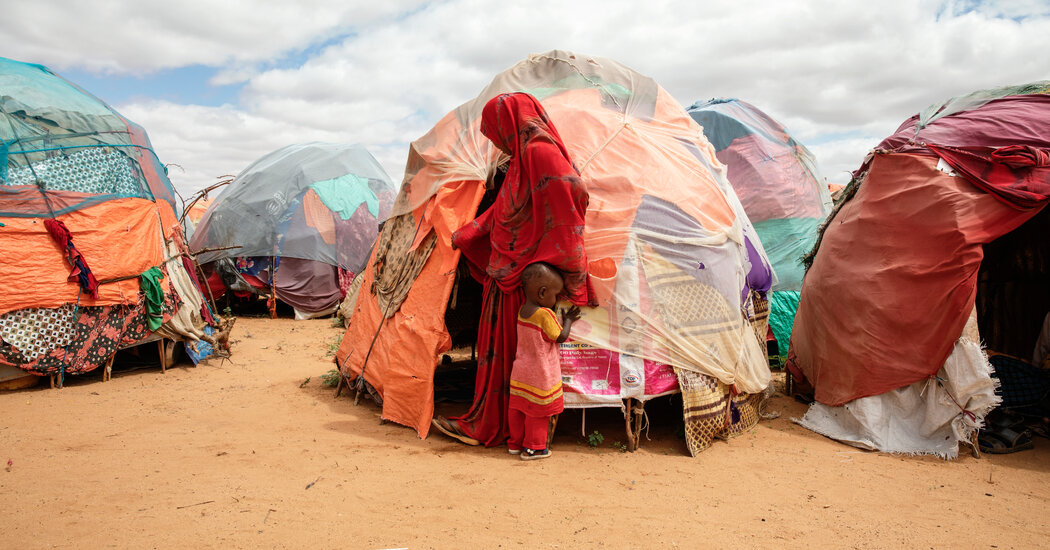 To Slow World Hunger, It Will Take More Than Ukrainian Grain Exports

NAIROBI, Kenya — In the Horn of Africa, villagers trek for days across dust-blown wastelands to escape drought-induced famine. In cities from Syria to Central America, families go to bed hungry. In Afghanistan, starving children stream into hospitals.

On Monday, a ship carrying grain that left the Ukrainian port of Odesa, the first since Russia invaded Ukraine in February, also carried fragile hopes that it might stem a global tide of hunger. Ukraine’s bulging stores hold 20 million tons of grain — trillions of calories trapped, until a diplomatic deal was brokered by Turkey and the U.N. last month. Another 16 grain ships are expected to leave in the coming days, navigating mined waters in the Black Sea.

But experts say that getting Ukrainian grain exports moving again will barely make a dent in a global food crisis that the United Nations secretary general, António Guterres, has warned could last for years.

The scale of the crisis — fueled by wars, the economic devastation of the Covid-19 pandemic and extreme weather often worsened by climate change — is so immense that no single advance would be a silver bullet.

As many as 50 million people in 45 countries are teetering on the brink of famine, according to the U.N.’s World Food Program. In the 20 worst-hit countries, the situation is likely to worsen substantially by the end of the summer, it said.

That suffering is the extreme end of an expanding spectrum of hunger. Across the globe, as many as 828 million people — one tenth of the world’s population — were undernourished last year, the highest figure in decades, the Food and Agriculture Organization recently estimated.

The war in Ukraine only exacerbated the problem, as Russia blockaded Ukraine’s ports on the Black Sea. Ukraine had been a major exporter of wheat, barley, corn and sunflower oil. Ukraine and Russia together supplied more than a quarter of the world’s wheat. An agreement to resume food shipments was reached only after months of negotiations made urgent by reports of rising food prices and spreading hunger.

Since the Taliban seized power in Afghanistan one year ago, triggering an economic collapse, life has become a grinding battle for survival, Mr. Ahmed said. He recently lined up for food aid to feed his six children, alongside hundreds of others in a once-wealthy district of the capital, Kabul. He said he couldn’t even turn to his relatives — the usual safety net among Afghans.

Our Coverage of the Russia-Ukraine War

“They have nothing left either,” he said. “How can I ask them for help?”

Funding for emergency aid lags far behind. In Yemen, where 60 percent of the population relies on food aid, aid workers have slashed rations to make them go farther.

“This is the only country where I’ve worked where you take food from the hungry to feed the starving,” said Richard Ragan, the World Food Program director in Yemen. “You have to make these choices because you don’t have the resources.”

Not long ago, the world was on track to eliminate hunger.

Between 2005 and 2014, the number of undernourished people, as measured by the Food and Agriculture Organization, fell nearly 30 percent to 572 million from 806 million. An ambitious goal of eliminating world hunger by 2030, adopted at a summit in 2015, seemed within reach.

But much of those gains came from China and India, where economic booms lifted tens of millions out of poverty. In Africa, where 20 percent of people face hunger, progress was grindingly slow. The hunger figure flatlined for several years, until in 2019 it jolted upward.

Wars and extreme weather events were the primary drivers: a rash of conflicts in Africa and the Middle East, as well as cyclones, droughts and other natural disasters that battered a string of vulnerable countries, mostly near the Equator.

Then in 2020 the Covid-19 pandemic struck, crushing livelihoods and causing food prices to soar. For Blanca Lidia Garrido López, that meant slashing her family’s diet.

A single mother of six, Ms. Garrido lives in Guatemala, one of the most unequal countries in Latin America, where she earns a living cleaning houses. As the pandemic progressed, she said in a phone interview, her income collapsed as her clients fell sick or canceled appointments.

Ms. Garrido stopped feeding any meat or chicken to her children, aged 3 to 18. Even eggs and beans became luxuries. “I live day to day,” she said.

When the U.N.’s count of hungry people climbed back over 800 million last year, some said that 15 years of progress had been undone. (Although as a result of population growth, the proportion of hungry people in the world fell from 12 percent to 10 percent.)

It signaled that chronic hunger — the kind that rarely makes the headlines, yet still scars lives and sometimes ends them — was spreading.

In the village of Afotsifaly, on Madagascar’s southern tip, two-year-old Jenny Andrianandrainy is struggling to walk and showing signs of cognitive damage from malnutrition, doctors say. He is among 50 malnourished children in his district, many of them born at the height of the devastating drought in Madagascar between 2018 and 2021, which wiped out crops and left half a million people hungry.

Jenny’s pregnant mother sold twigs and foraged for wild leaves in a desperate bid to feed her family. When Jenny was born, he weighed barely five pounds. Many such children have an increased likelihood of dying before they turn five.

About 13.5 million children in the world are “severely wasted,” according to Unicef, the U.N. children’s agency. The cost of saving a single life is modest: about $100 for a course of high nutrition food, Unicef says.

Climate change caused by burning fuels is another factor. The world is warming, causing water to evaporate faster from the fields. Changing rainfall patterns can bring either too much rain at the wrong time, or too little when farmers need it.

World powers are blaming one another for the hunger crisis.

On the eve of a visit to Kenya and Somalia last month, Samantha Power, the head of the U.S. Agency for International Development, accused President Vladimir V. Putin of Russia of “waging a war on the world’s poor” through his military campaign in Ukraine. She also criticized China for giving just $3 million to the World Food Program this year when the United States has given $3.9 billion.

Russia’s foreign minister, Sergei Lavrov, struck back last week, touring four African countries where he blamed the West for soaring food prices. He received a warm welcome in Uganda, a U.S. ally, and in Ethiopia, where millions are threatened with famine in the northern Tigray region.

For others, the Ukraine crisis shows the global community can band together to solve humanitarian emergencies — but only when it wants to.

As of Monday, a United Nations appeal for $2.2 billion in humanitarian aid for Ukraine has been 93 percent filled, according to the United Nations Financial Tracking System. But similarly large appeals for countries like Sudan, Afghanistan and the Democratic Republic of Congo, only received between 21 and 45 percent of requested funds.

In April the head of the World Health Organization, Tedros Adhanom Ghebreyesus, said the disparity raises questions about whether “the world really gives equal attention to Black and white lives.”

Ukrainian officials say that if their ships can continue to travel the Black Sea — an uncertain bet in the volatility of war — they can ship 20 million tons within the next four months. But that could also be bad news for vulnerable nations.

Moreover, there is no guarantee the Ukrainian wheat, which is being sold on the open market, will go to the neediest nations. The F.A.O. has proposed a new finance facility to help 62 poor countries to access that grain, as well as a global food reserve for aid groups like the World Food Program.

“It’s not that the deal is bad,” Mr. Torero said. “But it’s just one dimension of the problem.”

The machinations of global grain markets seem distant in the packed Doctors Without Borders children’s ward in Herat, a city in western Afghanistan near the border with Iran.

One morning in March, doctors clustered around a malnourished one-year-old boy, his body wracked with measles, shortly before he died. Hours later, a seven-month-old girl in a neighboring bed died from the same combination of diseases. Then it was 11-month-old Hajera who started to draw sharp, labored breaths.

“My angel,” whispered her mother, Zeinab, as a nurse strapped an oxygen mask to her face and covered her tiny body in a hypothermia blanket.

Hajera survived that night, and the next one too.

But on the third day, she also died.