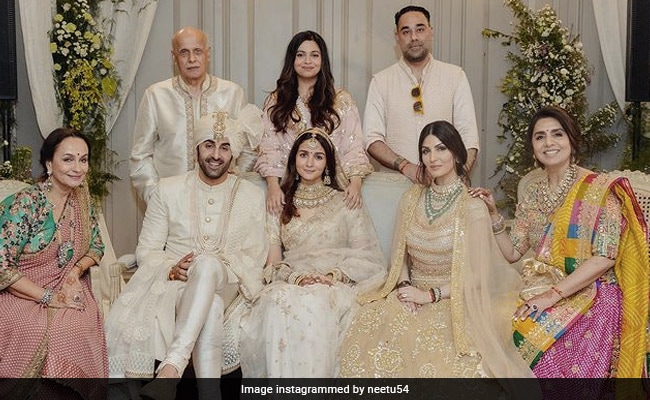 Alia Bhatt and Ranbir Kapoor embarked on their marital journey on April 14 in the presence of their close friends and family. As the Bhatts and Kapoors came together to celebrate the union, pictures were clicked to record the happy milestone of the power couple. Lucky for us, some of these images have now been shared on social media by their loved ones. One of the most special pics from the ceremony has been shared by the mother of the bride, Soni Razdan. Here, the Bhatt clan is huddling around the couple, flashing their best smiles.

The family portrait also included close friends of Alia Bhatt and Ranbir Kapoor including Karan Johar, and directors Ayan Mukerji and Abhishek Varman. Alia Bhatt’s makeup artist Puneet B Saini, who decked her up for the big day, is also part of the frame. Sharing the image, Soni Razdan lovingly declared in the caption, “This is us. We are family,” with a slew of heart emojis.

A similar and equally endearing image was shared by the mother of the groom, Neetu Kapoor. The veteran actress shared a family portrait graced by the newlyweds as well as her daughter Riddhima Kapoor Sahni and son-in-law Bharat Sahni. Also seen in the photo are Mahesh Bhatt, Soni Razdan and Shaheen Bhatt. In the caption, Neetu Singh wrote, “My family,” with a heart and evil-eye amulet emoji.

Riddhima Kapoor Sahni also shared a similar picture on Instagram and shared that Rishi Kapoor was sorely missed on the happy occasion. In the caption, she wrote, “Family. Missed my dad so much.” Rishi Kapoor died in 2020 after a prolonged battle with cancer.

Ranbir Kapoor and Alia Bhatt got married at an intimate wedding at the actor’s house Vastu. The couple will be seen together in Ayan Mukerji’s Brahmastra.