BISHOPENTERTAINMENT
HomeENTERTAINMENTThe slap Will Smith gave Chris Rock at the Oscars had a... 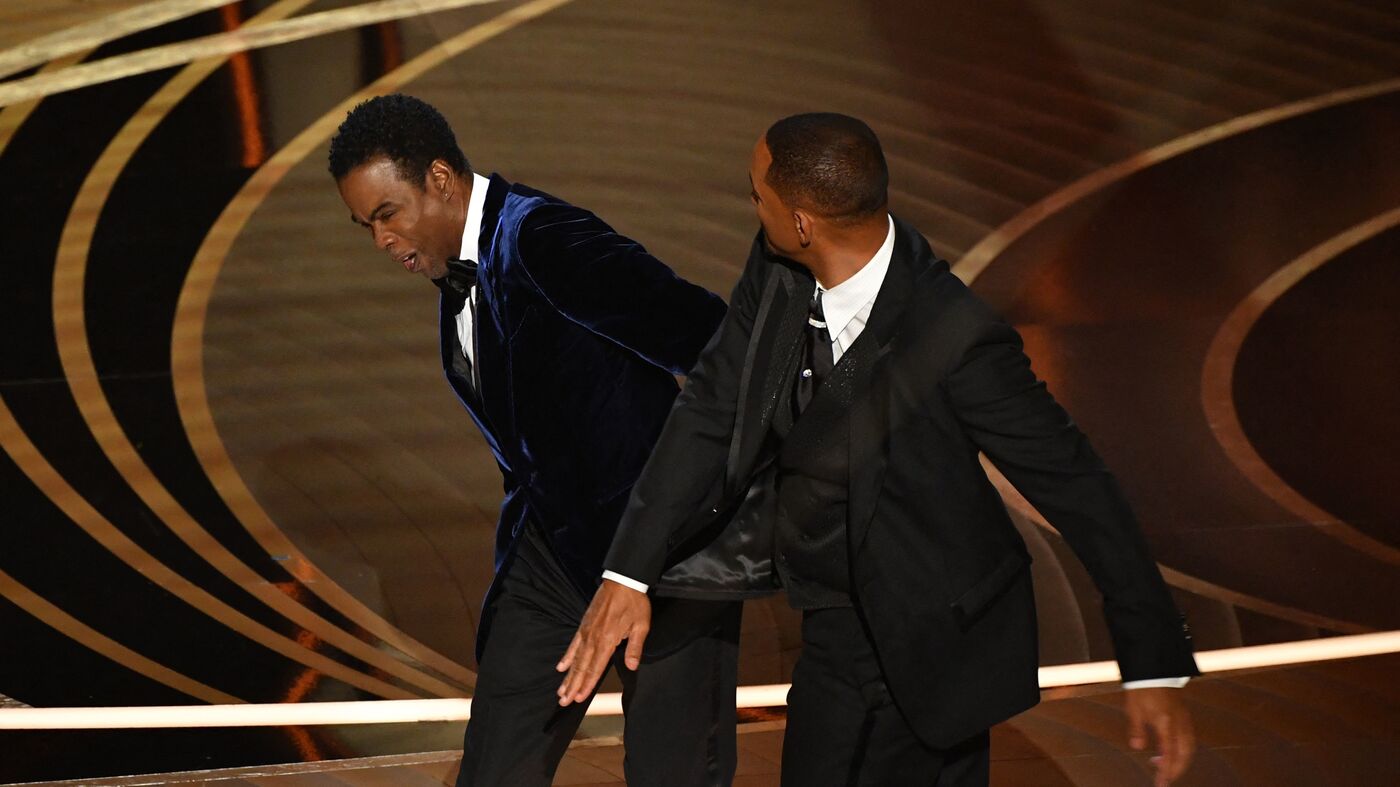 The slap Will Smith gave Chris Rock at the Oscars had a long history : NPR

Actor Will Smith (R) slaps comedian Chris Rock onstage during the 94th Oscars at the Dolby Theatre in Hollywood, California on Sunday.

Actor Will Smith (R) slaps comedian Chris Rock onstage during the 94th Oscars at the Dolby Theatre in Hollywood, California on Sunday.

Editor’s note: This post contains information that some may find offensive.

The third hour of the Oscars last night went viral — and not in a way that anyone could have seen coming. After Chris Rock made a crass joke making fun of Jada Pinkett Smith (“Jada, I love ya, G.I. Jane 2, can’t wait to see it“), Will Smith initially laughed and clapped while his wife looked stung. But a few moments later, the actor walked onstage and slapped Rock, then yelled profanities back to Rock after returning to his seat: “Keep my wife’s name out your f****** mouth.”

In the aftermath of that moment, critics and viewers are debating both Rock’s joke and Smith’s response.

It seemed that the Hollywood glitterati in the room last night did not know quite how to process or react to the altercation — and some viewers at home were left initially wondering if Rock and Smith were doing a comedic bit, while others digested the lack of response. “I’m tripping that you can assault someone on live television on stage at the Oscars and just take your seat and watch the rest of the show,” author Nikole Hannah-Jones wrote on Twitter.

(To be fair, this may have been the first time a physical fight broke out onstage, so there wasn’t exactly a templated response available. Moreover, there’s a history between Rock and the Smiths; back in 2016, Rock also made a couple of tough jokes at the couple’s expense.)

But when Smith made his 5-plus minute, uninterrupted acceptance speech for Best Actor in King Richard— in which he repeatedly framed the slap as a matter of defending his family (with tears streaming down his face), apologized not to Rock, but to the Academy and his fellow nominees; and concluded with the joke “I hope the Academy invites me back” — he received a standing ovation, laughter and applause, just minutes after assaulting Rock onstage during a global telecast. (By contrast, both Venus and Serena Williams looked glum and distressed when the cameras cut to them during Smith’s speech.)

During his speech, Smith seemed to justify his behavior by saying over and over that he is the protector of his family, an idea that some social media users have amplified. But Rock’s joke, and Smith’s physical response, have opened up conversations about toxic masculinity, and not just on Smith’s part. (Via a user named Loni on Twitter: “why is it that white feminists have labeled will smith’s behavior ‘toxic masculinity” but not chris rock’s pattern of belittling jada pinkett-smith and black women as a whole?”)

Jada Pinkett Smith’s condition is familiar to many women. According to Harvard Medical School, about 1/3 of all women experience alopecia, or hair loss, at some point in their lives; Johns Hopkins has reported that almost half of all Black women have experienced some form of hair loss.

Jada Pinkett Smith has for years been public about the fact that she is living with alopecia, and has been candid about it: “Me and this alopecia, we are going to be friends,” as she said in an Instagram video last December.

For many women, alopecia can be a source of embarrassment and emotional pain, especially considering how much value society traditionally assigns to hair as a marker of feminine beauty, status and personal identity, both universally and within the Black community — a theme that must be familiar to Chris Rock as the producer and narrator of the 2009 documentary Good Hair.

When Rep. Ayanna Pressley of Massachusetts publicly shared at the beginning of 2020 that she lives with alopecia, for example, she talked about seeing herself as “a person who increasingly looked like a stranger to me” as she lost her hair.

As of now, Chris Rock has declined to press charges against Smith, though the Los Angeles Police Department said in a statement Sunday night, “If the involved party desires a police report at a later date, LAPD will be available to complete an investigative report.”

The shock of the Smith/Rock fight eclipsed every other glowing moment and first during this year’s ceremony, including Tony Kotsur being the first Deaf actor to win an Oscar for his work in Coda; Ariana DeBose of West Side Story being the first openly queer actor of color, and first Afro-Latina, to take home a statue; Beyoncé’s stunning opening number, performed at the Tragniew Park Tennis Courts in Compton; and, most immediately, overshadowing Questlove who was next up onstage for his Best Documentary win for Summer of Soul, and who spoke movingly during his acceptance, saying: “This is not about me; this is about marginalized people in Harlem … this is not just a 1969 story.” Moreover, this was the first Oscars telecast made by an all-Black producing team, led by Will Packer.