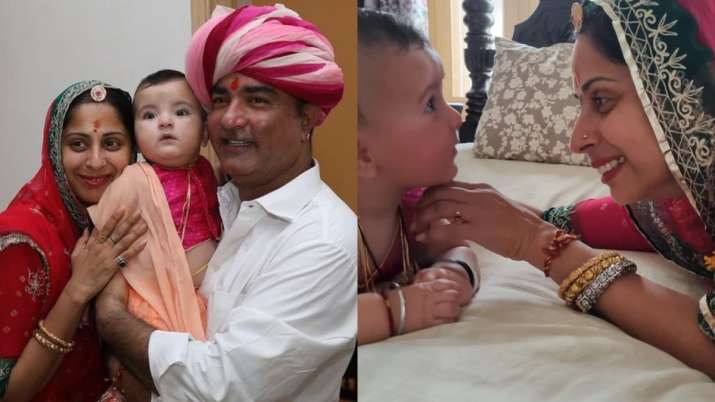 Swaran Ghar actress Sangita Ghosh made a shocking revelation about her personal life. The actress who rose to fame with her role as Pammi in the show, Des Mein Niklla Hoga Chand left everyone pleasantly amused when she shared that she is a mother to a seven-month-old daughter. Sangita who took a sabbatical from acting after her marriage recently returned to television with the show Kehta Hai Dil Jee Le Zara. The actress tied the knot with entrepreneur, Rajvi Shailender Singh. Sangita is currently embracing the motherhood phase. She had kept her pregnancy a secret until now. On Saturday, she revealed that her daughter named Devi was born prematurely.

The actress marked her Instagram debut by sharing the picture with her family. “Der Aayi Durust Aayi. A calling I could not resist. Personally one of becoming a Maa to Devi Rathore and professionally finally making it to the “gram.” Let’s begin. Lots of Love Sangita Ghosh ( The Real One ),” she captioned the post.

Talking to ETimes, Sangita shared, “Devi was born prematurely on December 25 last year. It was an anxious time, as she had issues being a premature baby and was in the NICU for 15-odd days. It’s not that we hid the news, but we decided not to talk about it till we felt the time was right.”

Recalling the first time she held her daughter in her arms, Sangita mentioned, “Sometimes, it feels so surreal that I ask my husband to pinch me. Devi is a very happy child and a copy of my husband. I recited the Gayatri Mantra when I held her for the first time… she opened her eyes and smiled. I can’t forget that moment.”

Talking about taking up a show after having a baby, she said, “I was in two minds about taking up the show, but my husband supported me and told me that he was there for the baby. That kind of support and confidence was overwhelming. Devi was with me in Chandigarh for a month. She gives me so much joy and I do miss her terribly when she is not with me. The graduation from a woman to a mother makes me feel complete and empowered. My tiny one has me wrapped around her little finger.”

Unfortunately in 2015, the actress suffered a miscarriage and that’s why she chose to keep her pregnancy a secret this time. “I can’t explain how bad the experience was. I couldn’t believe it and kept wondering mere saath aise kaise ho gaya. Imagine losing a life that’s growing inside you. I needed that confidence and appreciation. So, I got busy with work. Then the pandemic happened and my husband brought up the topic of starting a family again. I was really scared, but he was keen. So, here we are. We didn’t tell anyone because I was worried and superstitious. We informed our mothers after six-to-seven months,” she added.

Also read: Who is Lily-Rose Depp who will appear alongside The Weeknd in HBO’s The Idol?

Meanwhile, on the work front, the actress is currently seen in Swaran Ghar.