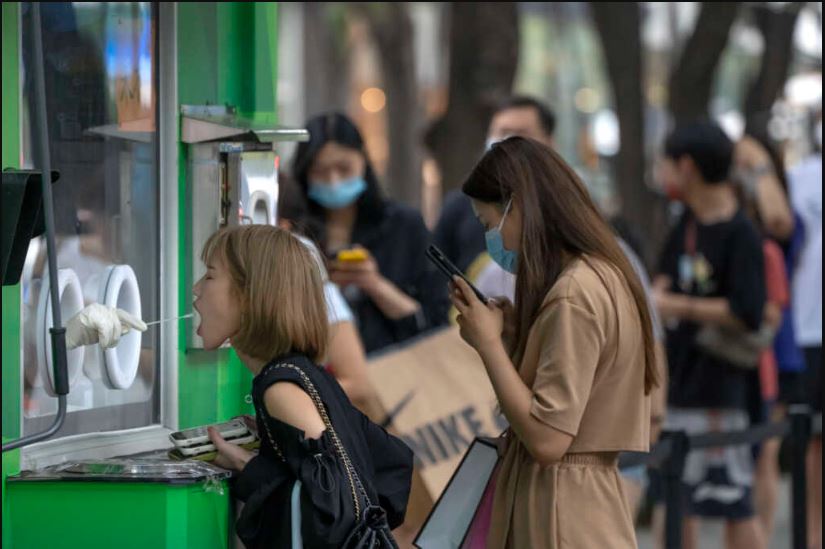 Communist China has frequently shown a willingness and desire to oppress its own citizens – it’s the latest initiative to stop the further spread of COVID that illustrates the latest example of what big government control looks like in reality.

CNN’s Selina Wang took a stroll through Beijing to provide a look at the extreme restrictions in place to combat COVID. While the reporter failed to label the government communist in the report, the fact that the oppressive regime allowed the report to air in the first place was surprising.

It begins with a look at the “mandatory testing” going on for the 20 million plus residents of Beijing, with people subjected to waiting in line, getting tested, and scanning their health status via QR code nearly everywhere they go.

This, despite only having a “few dozen daily COVID cases” according to Wang.

Schools, gyms, indoor dining, and more have all been shut down. Scores of fully-covered workers can be seen heading down streets in packs, spraying down the streets and sidewalks.

Perhaps most disturbing is Wang’s demonstration of how the QR code system works. Before entering any business or even local area, citizens must scan their phones using QR codes. The government then tracks this information and uses it to further restrict the movement of citizens.

A “green” code allows entry, but a “red” code not only denies access but potentially cause someone to be “sent home” or “sent to quarantine” according to Wang’s report.

Wang does not mention “communist” when discussing the Orwellian restrictions on camera, nor at any point in the segment, though she does reference the situation as “dystopian movie” and says her entire day is dictated by the color of the code on her phone, which the government tracks.

If you spend too much time near a location where a positive COVID case has appeared, you will likely be restricted. It is not explained what happens to anyone who dares to violate or otherwise disobey a red code on the phone.

Wang showed what happened to an apartment complex that received a report of one COVID positive case – the entire apartment was shut down, no residents allowed in or out, and a team of suited government monitors quickly descend on the building and set up a sprawling tent facility.

“People are getting frustrated” Wang explained, saying “every part of our days are tracked and surveilled. People are concerned that this control is here to say long after COVID is gone.”

Wang’s concerns are, of course, well founded. Communist regimes have a long history of human rights abuses at the expense of pushing state propaganda.

CBN News has reported extensively on China’s restrictive actions. CBN CEO Gordon Robertson recently explained the dangerous push China is making toward a cashless society and the consequences that will have in a country run by tyrants:

All you have to do is look at what’s happened in Hong Kong over the past just two years and you get a very clear picture of where they’re going. But they want to control, and they’re doing it right now with social credit scoring where if you don’t score a particular way you’re not allowed to travel. That’s already in place.

But just imagine a government that if you step out of line they can now turn off all your money and do it instantly so you cannot buy or sell, you don’t have the right in the marketplace to participate anymore.

That’s what digital currency allows a government to do. And if you think it’s just going to happen in China think again. The Federal Reserve already has a study group looking at a digital currency for the United States. Why are they doing that? Because they’re afraid China will usurp the U.S. and become the world currency, that digital currency is taking over.”

Not long after these comments were made, protests erupted some 300 miles outside of Beijing where thousands of citizens with money in six banks suddenly were denied access to those funds.

To make matters worse, protesters who set out to demand action from government regulators were given “red” QR codes for their health status and forbidden from travel.

Wang’s report focuses on the inconvenience factor of the restrictions, only briefly mentioning the nefarious possibilities now in the hands of a communist dictatorship. The connection, however, between mandated digital tracking devices during “health emergencies” and government abuses using this technology are self-evident.

China historically has proved they are willing to harm its own citizens in order to protect the communist regime, and these latest actions serve as further evidence that Chinese citizens have very few individual liberties.