BISHOPENTERTAINMENT
HomeENTERTAINMENTSorry Karan Johar, But Twinkle Khanna Is Only Interested In "Tea With... 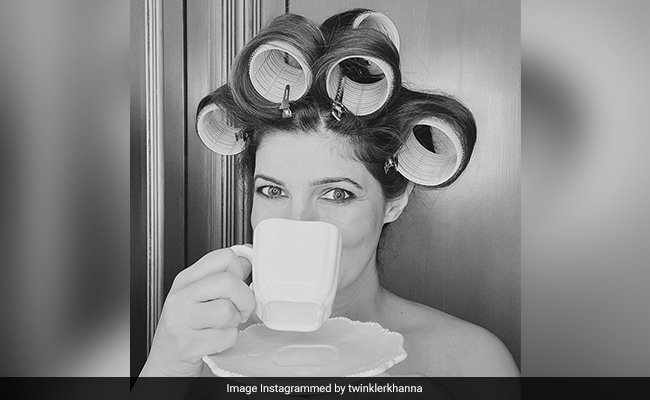 Sorry Karan Johar, But Twinkle Khanna Is Only Interested In “Tea With Twinkle”

Twinkle Khanna wears many hats. She is an interior designer, author and entrepreneur. However, Twinkle Khanna is best known and loved for her sharp wit and great sense of humour. We see an example of this in her latest Instagram post. It features a black and white image of her sipping on some tea with hair tied up in rollers, while on set for a shoot. In the caption, she wrote, “Just rolling with it. On a set I am prone to mumbling, “Shoot me now,” though I secretly mean with a Nerf gun and not a camera, but then there are days like these when it’s all fun and games.”

That’s not all. Twinkle Khanna even referred to her close friend and director Karan Johar in the caption. She said, “Hmm…Can’t do Koffee with Karan again but Tea with Twinkle may not be a bad idea after all.” For the unversed, Karan Johar is returning with a new season of his highly popular celebrity talk show Koffee with Karan.  Twinkle Khanna has featured on the fifth season of the show with her husband, actor Akshay Kumar.

In the caption, Twinkle Khanna also added the hashtags “behind the scenes” and “shoot me now”. Several fans replied to the post, telling the author that “Tea with Twinkle” sounds like a brilliant idea.

While we love the idea of “Tea with Twinkle”, it does seem like the author has her plate full, already. A few days ago, Twinkle Khanna announced that one of her short stories Salaam Noni Appa will soon be turned into a film. Sharing a picture with the team, Twinkle Khanna wrote, “Hurrah. Applause Entertainment, Ellipsis Entertainment and Mrs Funnybones Movies collaborate on a movie adapted from my short story Salaam Noni Appa. This movie is truly special because I am working with some incredibly talented friends like Tanuj Garg, Sameer Nair, Atul Kasbekar and it is being directed by leading adman Sonal Dabral.”

Speaking about what the project means to her, Twinkle Khanna added, “Salaam Noni Appa is loosely based on my grandmother and her sister. I am fortunate that my Nani got to see it when it was turned into a play by  Lillete Dubey and I am certain she would have been chuffed to see it being turned into a movie as well.”

On the occasion of Women’s Day, Twinkle Khanna gave us a glimpse of her all-women team at Tweak India, the digital content company launched by the author, and said, “Every day is Women’s Day with this bunch in the office. Tweaking it as we go along.”

Twinkle Khanna has been married to actor Akshay Kumar since 2001. The couple has a son, Aarav and a daughter, Nitara.