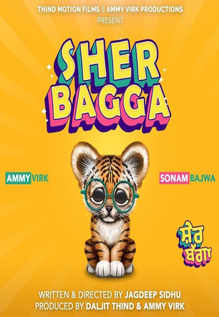 Review: Gulab (played by Sonam Bajwa) is seeking the kind of love embodied in her grandmother’s stories of her husband- pure and honest. Disillusioned in her parents who are leading their own lives after being remarried to their respective new spouses, Gulab ends up on the metaphoric trail of kissing every toad in search of her prince charming. And meeting Satveer, who hails from Punjab, is another toad experience, leaving Gulab sad and angry. In portraying Gulab in all her moods, Sonam is so deeply into the skin of the character that its tough to tell the actress and her on screen character apart. Kudos to Sonam for putting in a compelling honesty to Gulab, her highs and her lows, her tantrums and her mellowness. This is perhaps one of the most challenging roles of her career as she plays a pregnant woman and emerges victorious, effortlessly. Ammy Virk, who plays Dilsher aka Shera, is repeating his simpleton role from previous few outings, however in Sher Bagga his character’s innocence stems from the purity of a true lover.

As the two end up unintentionally spending one intimate night together, the credit for tackling this awkwardness, which is for the first time on screen a Punjabi film, goes to director Jagdeep Sidhu. Also the writer of the film, Sidhu is fast mastering the dexterity of complex stories in Punjabi films. Gingerly masking the love making scene, Sidhu is playing a strong narrator through his direction by commuting a bold scene into the narrative through its aftermath, rather than filming the scene per se. A great connect for the modern audiences, the story is revealing, yet shy of any visual boldness that may bring blushes while watching it with elders in the family.

The film’s music, however, is not its strength. While lyrics are profound, they don’t match the intensity of emotions being displayed. Maybe for another film this music would have done well, but for Sher Bagga they don’t do much to support the narrative.

While veteran actress Nirmal Rishi, who plays Shera’s grandmother, is not her usual boisterous old lady on screen, nevertheless even in this story she doesn’t lose her punch.

Sher Bagga remains a turning point in Punjabi cinema and celebrates modern relationships minus their crudity while reiterating the fact that pure loves is still around.