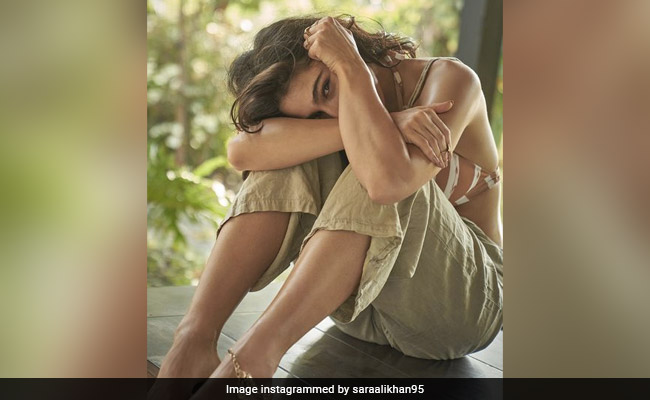 Sara Ali Khan is a palette of moods. At least, that’s how she is on her Instagram page. And, we simply love it. So, what is Sara’s current mood? She calls it, “Moods of Mowgli.” Her caption also added some palm tree emojis. In the photos that the actress has shared on the platform, she is wearing a sap green dungaree. Sara’s messy hair and laid back vibes suggest that her “Mowgli” mood must be quite a chilling one to be in. Sara’s aunty Saba Pataudi has given a thumbs up to the mood. “Jungle vibes…Yet classy and cool,” she wrote.  A person said, “You are like Mowgli girl.”

Sara Ali Khan has also shared some pics on Instagram Stories. Apart from adding monkey and palm tree emojis, she gave us a reality check. Along with two photos of herself in her “Mowgli” mood, Sara made an “expectation vs reality” post. In the first photo, she is smiling ear to ear whereas in the second photo she looks a bit annoyed.

On the occasion of Siblings Day, which was on April 10, Sara Ali Khan entertained her fans with a super adorable banter with her brother Ibrahim Ali Khan. In the video, Sara asks her brother if they are similar. Ibrahim says, “No. You?”. Just then their mother, actress Amrita Singh interrupts and says, “Both are nuisances, both are demanding nuisances.” The brother-sister duo’s fun banter continues. Sara captioned the video, “Happy Sibling’s Day. Watch us laugh, sing and play. I know I’m annoying by the way. But as Iggy Potter knows- that’s here to stay.”

Earlier, Sara Ali Khan gave us a sneak peek into her secret talent. What’s it? “Main bohot accha gaana gaati hoon (I sing very well),” says Sara when someone asks her to disclose  In the caption, the actress wrote “Eating or singing? Which is my real skill?”

Sara Ali Khan was last seen in Atrangi Re, co-starring Akshay Kumar and Dhanush. She will next feature in Laxman Utekar’s untitled film with Vicky Kaushal and Gaslight alongside Vikrant Massey and Chitrangada Singh.