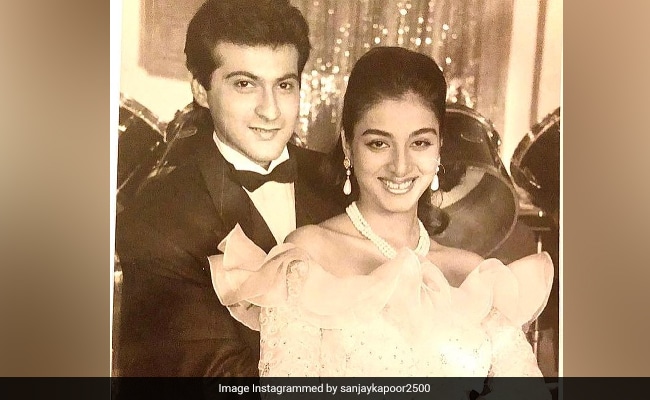 It is Thursday and Sanjay Kapoor has the perfect Throwback Thursday picture for all his fans. It is also a special day, the actor said, sharing that it has been 27 years since his debut film Prem released. On the occasion, Sanjay Kapoor shared pictures with his co-star Tabu and spoke about how the cast and crew had shot the first schedule of the film in 1990 and could only return to shoot the next schedule three years later. The film was subsequently released in 1995. Also in the carousel are posters of the film and a picture of the lead cast with the film’s director Satish Kaushik.

In the caption, Sanjay Kapoor wrote, “27 years of Prem, May 5, 1995. This first picture was taken way back in 1990; our first schedule of 40 days at Seth studios. Had to wait for 3 years for the next schedule in 1993. The wait was extremely tough but I waited patiently. People called me the oldest newcomer, I laughed it out. When the going gets tough the tough get going. Stayed positive and after 32 years I am still doing what I love doing the most to be in front of the camera!”

He also thanked the cast and crew of the film in the caption including Tabu, Satish Kaushik, Sanjay’s brother Boney Kapoor, Javed Akhtar, Baba Azmi, Ashok Mehta and added, “And above all my father Suriender Kapoor.”

A few weeks ago, Sanjay Kapoor shared a post looking back at Koi Mere Dil Se Pooche. It was the film’s 20th anniversary. The film featured Sanjay Kapoor in his maiden negative role. In the caption, Sanjay Kapoor wrote, “20 years of Koi Mere Dil Se Pooche. My first negative role was extremely challenging as this film I started immediately after Sirf Tum which was a romantic super hit film but I knew to make a mark as an actor I had to do something different. Cut my hair. Made my body and took up the challenge. Was very fortunate to get a chance to work with Jaya ji. And had a great time working with Esha and Aftab. Esha Deol was introduced in this film #timeflies.”

Sanjay Kapoor is the brother of actor Anil Kapoor and producer Boney Kapoor. On the work front, Sanjay Kapoor was last seen in the Netflix series, Fame Game with Madhuri Dixit.