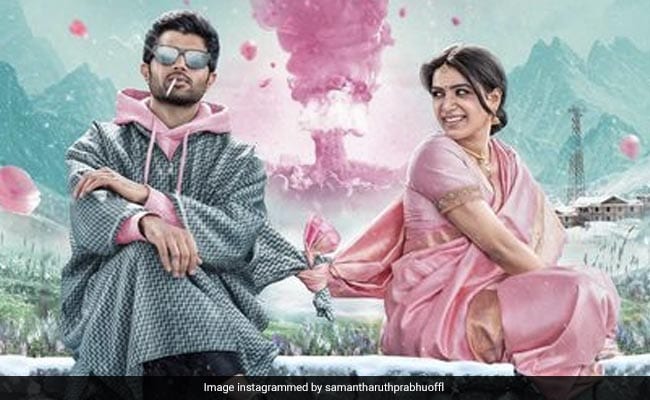 Shiva Nirvana’s forthcoming film starring Samantha Ruth Prabhu and Vijay Deverakonda has been titled as Kushi. The actress recently unveiled the first look of the film and captioned it as “This Christmas- NewYears. An Explosion of Joy, laughter, happiness & Love. A Grand Family experience!”. Along with the poster, she also revealed the release date, “#KUSHI Telugu Tamil Kannada Malayalam Dec 23 Worldwide Release!”. In the motion poster, Samantha looks pretty in a pink saree, while Vijay looks dapper in a pink sweatshirt and black pants layered with a grey pheran. To be noted, the end of Samantha’s saree is tied-up with Vijay’s clothes. In the backdrop, we can see beautiful snow-capped mountains

Vijay  Deverakonda also shared the motion poster on his Instagram handle with a different caption “An Epic Romantic comedy in the making 🙂 This one is for all of you and your families #Kushi“.

Earlier, the film was titled as VD 11. Kushi will release in four regional languages – Telugu, Tamil, Kannada and Malayalam. Talking about the film, it is a romantic drama also starring Jayaram, Murali Sharma Lakshmi, Srikanth Iyengar, Kishore, Sachin Khedekar and Rahul Ramakrishna in the supporting roles. Currently, the team is shooting in Kashmir. Soon they will be moving to Vizag, Hyderabad and Alleppey for the forthcoming shooting schedules.

Meanwhile, on the work front, Samantha Ruth Prabhu was recently seen in Kaathu Vaakula Rendu Kaadhal. Next, she will be seen in Shaakuntalam and Yashoda. Vijay Deverakonda, on the other hand, will be soon making his Bollywood debut with Liger, co-starring Ananya Panday.