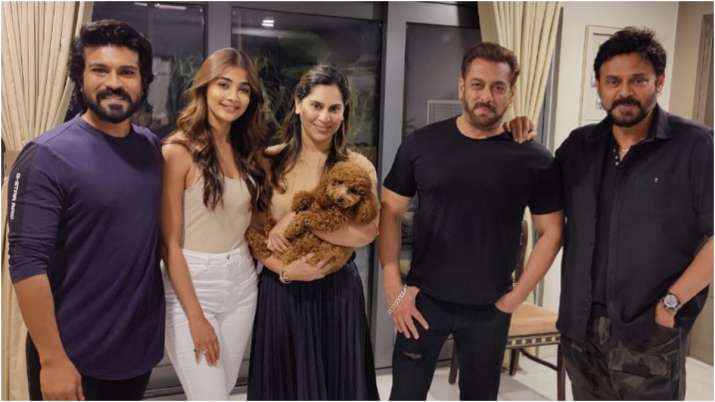 It was a treat for fans when Bollywood superstar Salman Khan united with South star Ram Charan. The actor paid a visit to Ram and his wife Upasana Kamineni Konidela recently at their home and the photos speak highly of the camaraderie the two share. A photo from their friendly meet was posted on the Instagram account of Ram’s pet Rhyme. In the photo, Upsana is seen holding Rhyme in her arms with other guests posing by her side. The picture was captioned as, “I’m one lucky puppy. Love, hugs & cuddles–all for me.”

Bollywood and South diva Pooja Hegde opted for a beige top, white slim pants and shoes. While Upasana opted for a salmon top and blue skirt. And Ram Charan went for a royal blue tight-fit shirt and black slim pants for the get-together. Prior to this, earlier this month, Salman Khan met Telugu stars Chiranjeevi and Venkatesh in Hyderabad and a picture from the trio’s meet-up went viral on social media at that time.

The ‘Bajrangi Bhaijaan’ is currently busy shooting for his upcoming movie ‘Kabhi Eid Kabhi Diwali’ in Hyderabad. The movie is helmed by Farhad Samji and produced by Sajid Nadiadwala. This film’s title, ‘Kabhi Eid Kabhi Diwali’, was initially announced by Salman back in 2022. The movie, which will have Pooja Hegde and also reportedly Shehnaaz Gill, as the female lead, alongside Aayush Sharma and Zaheer Iqbal, is scheduled to release on December 30, 2022.