Priyanka Chopra and Nick Jonas, who welcomed their first child via surrogacy earlier this year, shared the first picture of their adorable daughter on the occasion of Mother’s Day. Their fans and industry friends showered love on the post.

In the photo, Priyanka is seen cuddling her bundle of joy as Nick holds her little hand. The couple refrained from showing the face of their daughter. PC also wrote a heartfelt note where she opened up about her experience of spending more than 100 days in the NICU.

As soon as she shared the post, her fans and friends showered her with love in the comment section. While Ranveer Singh wrote, ‘Oh PC!’, followed by a heart emoji, Preity Zinta added, ‘So Happy she is finally home babe. Enjoy every bit of parenthood & all the milestones of being a mommy. Big hug n loads of love always.’ Zoya Akhtar, Dia Mirza, Katrina Kaif, Shibani Dandekar and others too liked the post and congratulated the couple. 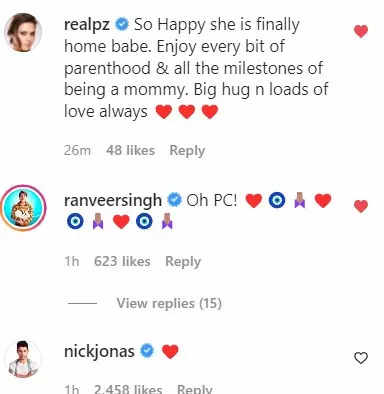 Although they are yet to reveal the name of their daughter officially, several reports in the past suggested that Priyanka and Nick have named their daughter ‘Malti Marie’ as a tribute to their respective mothers.

Meanwhile, on the work front, Priyanka will next be seen in Farhan Akhtar’s directorial, ‘Jee Le Zaraa’ where she will be sharing the screen space with Alia Bhatt and Katrina Kaif for the first time. Apart from this, the actress is also a part of projects like, ‘Citadel’, ‘It’s All Coming Back to Me’, and others.