In an interview with us years ago, Ranveer Singh had expressed that he aspires to be an actor who is brilliant in any genre, and he wants the audience to think, ‘yeh banda kuch bhi kar sakta hain.’ Today, here we are, having watched his remarkable innings in cinema for the past 12 years, this is exactly what we are thinking. The banda, who believes in no half measures, has arrived at his goal post. And he is already on to his next set of goals and is chasing it with all the fire in him. In a conversation, he talks about how he gives his entire being to movies, and what he craves for and seeks. Ranveer is on a roll. Read on…

With your recent film 83, you scaled new heights as a performer and won immense accolades. Does this put immense pressure on you in terms of — how the audience expects you to surprise them with a character that is unforgettable and unique each time, and then, there are box-office expectations that come with stardom?
Pressure, I think, has a negative connotation. I don’t really subscribe to this idea of feeling pressure. I feel pressure can be limiting and debilitating at times. I understand there is a certain responsibility that comes with stardom to deliver certain box office numbers. But things that are beyond my control are not my prerogative, after a point. I accept the responsibility that comes with stardom, but my only focus is to choose films, stories and characters that can fit as many of my criteria as possible. It should excite and challenge me as an artiste. I am going through a phase where I want to make films which bring people together. Films that entire families, people of all ages and from all walks of life can sit and enjoy together; and films that don’t alienate a component of our broad spectrum of audience. I am an actor first and foremost, and for me, stardom is just a by-product. I focus on the core of what I do, which is creating characters, pushing boundaries and pushing the envelope in terms of performance — and that is my concern. Beyond a point, box office and delivering big box-office numbers is not my primary area of concern.

In an interview with us in 2019, you had said, ‘I started out wanting to be a Hindi film hero. Along the way, I matured and aspired to be an actor.’ And quite a journey you’ve had, Ranveer, and quite an actor you’ve turned out to be! Whether you are wooing the masses as Simmba, plunging into the dark side as Alauddin Khilji (Padmaavat), playing an intense rapper (Gully Boy) or portraying the cricketing legend Kapil Dev (83) — do you feel proud and fulfilled with the level that you have arrived at, as an artiste?
I am extremely happy with the way my filmography has shaped up. This is what I had always envisioned — a diverse range of characters. I had always worked towards being effective in a range of diverse characters, one after the other, and encompassing a broad spectrum of genres. And that’s how it has happened in the past few years. Yes, my filmography is shaping up even better than what I had imagined. Part of this has to do with what characters were offered to me and at what time. In that sense, I have been very lucky that I could work with such different filmmakers with vastly different styles. Another thing, it gives directors confidence across genres. It gives them faith that I will be effective in their respective worlds even though their genres and styles are so different from one another. I have always wished to be recognised as a versatile actor. The manner in which things have played out and the versatility that I have been able to showcase are now being widely recognised. I hope it continues this way. Like
Jayeshbhai Jordaar is a character you haven’t seen me play before and it’s been a fresh challenge for me. 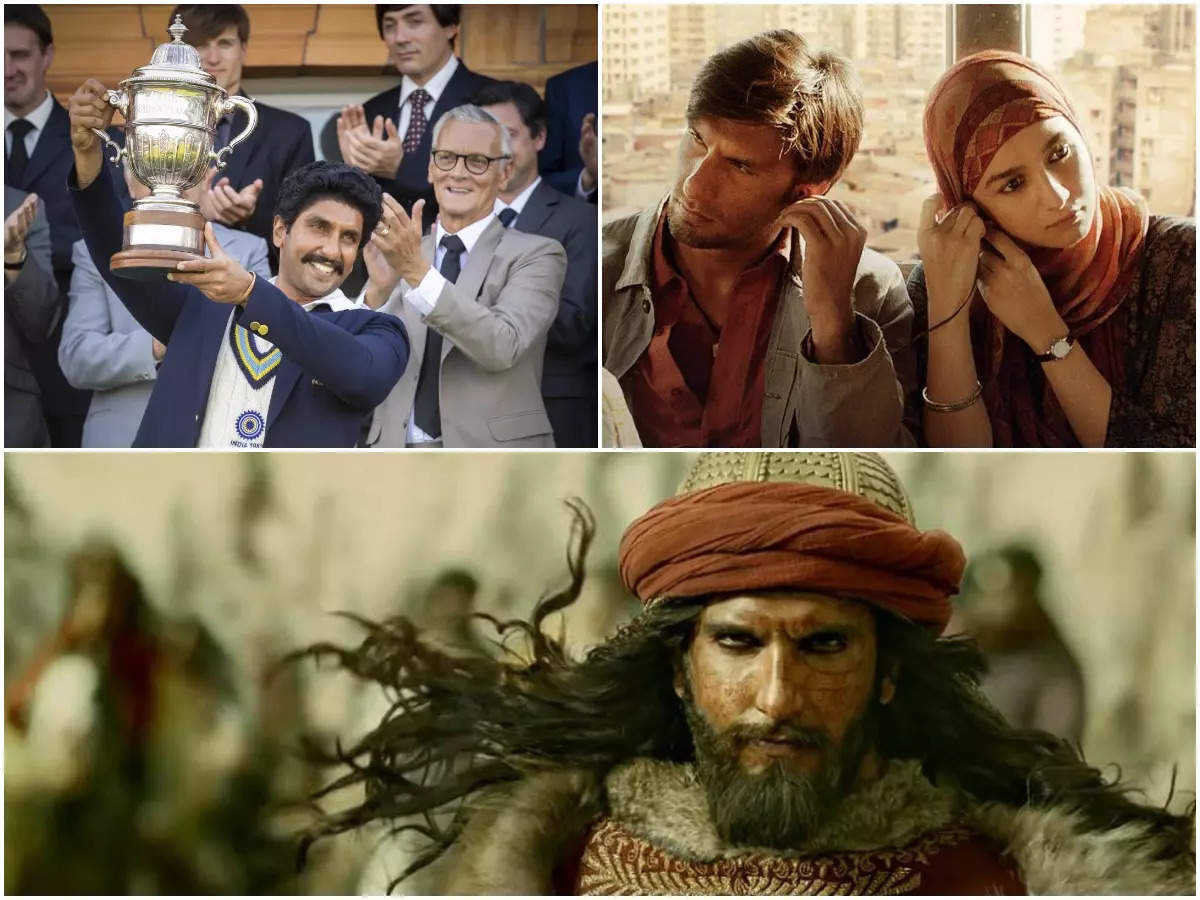 During Padmaavat, we had spoken about how you went into a dark phase emotionally to play Alauddin Khilji. The fact that you strive to reach the depths of every character is known. For 83, you actually lived for a while with Kapil Dev to observe him closely. Does this kind of prep provide unique insights and experiences that stay with you for life?
Yes, you are right. The thing is, I wish to create characters that are starkly different from one another. I lean towards making high-risk choices. I change my expression, body language and modulate my voice. I get into every detail, like the way the person sits, stands, looks and reacts. This process is what excites me. 83 was a challenge for me because this is a known person. Earlier, the canvas was mine to create, but here there were certain parameters that I needed to keep in mind whilst creating the person. A key in this process would have been video footage, but there was not much of that available. So, Kabir Khan (director) and I realised that the only way we could fill this gap was by involving Kapil himself and interacting with him in person. It was a very enriching learning experience for me, and it helped me grow not just as an actor but also as a person.

In an interview many years ago, an actor who you hugely admire, Christian Bale, talking about his philosophy, had said, ‘Whatever you do, do it completely. Don’t do it half a**ed. Do it more than anybody else would.’ Do you in some way relate to this mantra? I am asking you this because when we see you on screen in character, it is hard to imagine anyone else pulling off the same part with the same impact. You are wholly into the role every time.

Yes, I fully subscribe to that. My entire approach towards acting and towards life is that I am all in, I am always all in; no half measures, no middle ground. I always say that if you are doing something, do it with all your heart, give it your everything and be completely present and immersed in it. If you’ve got a certain goal, then chase it with all the fire, intensity and passion that you have. If you are playing a character, go for it full tilt and see how much you can push yourself and achieve in the effort to become somebody else. This philosophy holds not just true to my craft, but also to my life.

How much has being an actor, and playing such varied shades on screen impacted Ranveer Singh, the person? I mean, how much has being an actor contributed to be the person you are today?
Each character has left me with something that has helped me grow and evolve. Going through any creative process usually teaches you something; and, in the best of cases, leaves you enriched. In some instances, you grow and evolve more than others and it’s those growth spurts that I crave and seek. Every director you work with, the co-actors you interact with, the on-the-set experiences, discoveries during characterisation and performance — I am in a state of constantly learning and improving my craft through all this. When the work is challenging and when your back is against the wall, is usually when you learn the most. I always look back and cherish those experiences that teach me something.

Your collaboration with most of the directors that you have worked with seems solid — whether it is Sanjay Leela Bhansali, Zoya Akhtar or Rohit Shetty. None of them stop at just one film with you. What makes the connection so strong and special, and I assume, it goes beyond the results (box-office success) that we see?
As I said, my approach to acting is all in when I decide to collaborate with a director. I give my entire being to them. Everything that I have to offer, I bring that to the table, pump that into the process, into the film and the character. That kind of energy and commitment is recognised by them, which is why they like to collaborate with me project after project. At the beginning of my career, my mentor, Aditya Chopra, had said that anybody you work with, you must give them so much value that they should not be able to think beyond you when they are planning their next film, and that has stuck with me. Being an all-in kind of performer, these directors are able to recognise my sincerity towards my work. These directors enrich me as a performer and they’ve given me some of my best films and characters, and I hope and wish to continue to do more with them and learn from them.

Apart from Jayeshbhai Jordaar, you have Cirkus (helmed by Rohit Shetty), and another interesting addition to the mix with Rocky Aur Rani Ki Prem Kahani, being directed by Karan Johar, who comes from a fairly different space and sensibility. How did that experience unfold?
I am honoured to be Karan Johar’s leading man. He’s made cult films that we have grown up on. It’s a Karan Johar romantic family dramedy, a genre that he has full ownership of. In spite of being on familiar territory, we are still, between ourselves, trying to push the envelope in terms of characterisation. He has put together a stellar cast. Every character is bringing so much value, and I have thoroughly enjoyed working with all these fine actors. Alia (Bhatt) and I have such a great working relationship. I think she brings out the best in me as a performer; she elevates her co-actor’s performance. Also, significantly, it’s the kind of film I am very keen to present to the audience in my current phase; colourful and a feel-good family entertainer. I think the world has gone through a tough time and a film that carries an essential lightness of being, we are hoping will be looked forward to, by the audience.