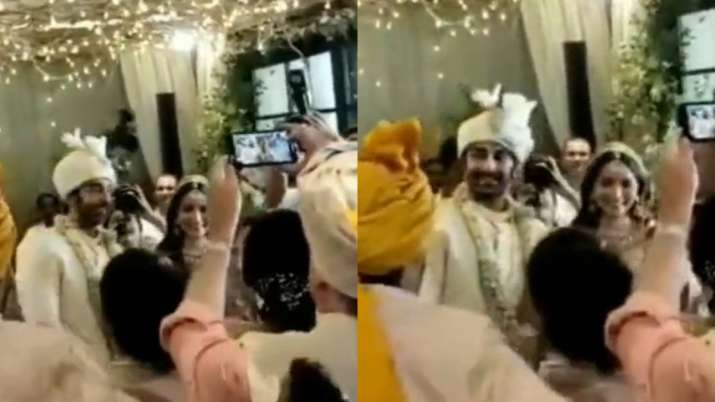 
Ranbir Kapoor and Alia Bhatt finally got married this month and we are still not over with their beautiful pictures and videos. Every now and then, a new clip appears on social media and leaves everyone in awe. Yet again, a new one emerged from their extremely private ceremony which was attended by family and close friends. This particular video has gone viral on the internet and has been shot during the time when the couple were exchanging their varmala. After the ceremony got over, the groom can be seen proudly introducing everyone to his ‘wife’ Alia as he says, “Say hi to my wife.” In response to his adorable gesture, the actress blushes and even waves at everyone and says, “Hi.”

Have a look at the same here:

After their wedding, Alia formerly made an announcement on Instagram and shared some dreamy pictures. Alongside in the caption, she wrote, “Today, surrounded by our family and friends, at home … in our favourite spot – the balcony we’ve spent the last 5 years of our relationship – we got married. With so much already behind us, we can’t wait to build more memories together … memories that are full of love, laughter, comfortable silences, movie nights, silly fights, wine delights and Chinese bites. Thank you for all the love and light during this very momentous time in our lives. It has made this moment all the more special. Love, Ranbir and Alia.”

The two of them have skipped their honeymoon and resumed their respective projects. Ranbir has currently started shooting for Sandeep Reddy Vanga’s film ‘Animal’ co-starring Rashmika Mandanna. He even has Luv Ranjan’s next in the pipeline.

While Alia Bhatt will next be seen in films like ‘Brahmastra’ opposite Ranbir, ‘Rocky Aur Rani Ki Prem Kahani’ and ‘Takht.’