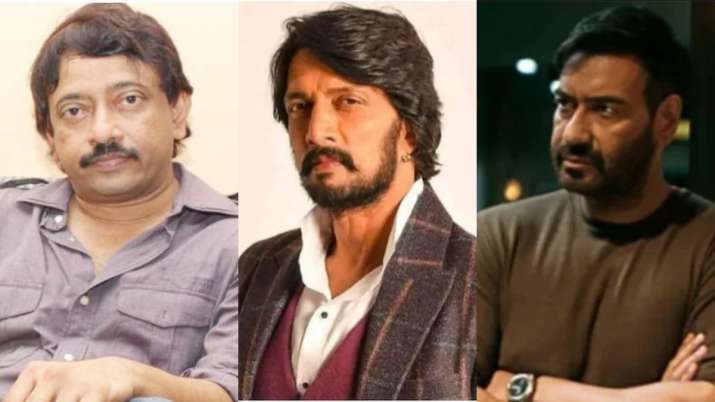 Ram Gopal Varma has lauded South star Kichcha Sudeep for his response to Bollywood actor Ajay Devgn who said that Hindi “was, is, and will always be our national language.” The filmmaker took to his Twitter handle and retweeted Sudeep’s tweet to Ajay in which the former actor asked how the situation would pan out had he replied to Ajay’s tweet in Kannada. RGV said, “Nothing can drive the point better than ur question on ,what if you answer in Kannada to a Hindi tweet from @ajaydevgn.. Kudos to you and I hope everyone realises there’s no north and south and india is 1.”

He further shared Sudeep’s statement where he said that he did not intend to hurt or provoke anyone with his remark on the language. RGV added, “Whether u intended or not am glad u made this statement ,because unless there’s a strong stir , there cannot be a calm especially at a time when there seems to be a war like situation between Bolly(north)wood and Sandal(South) wood.”

He continued to share Ajay’s response to Sudeep in which he thanked Sudeep for clarifying the misunderstanding, RGV tweeted, “I believe so Ajay ..I know u as a person for so long and I know u could never mean it in the way it seemed to some ..Languages grew out of regional and cultural conviniences and were always meant to integrate and not separate.”

For the unversed, on Thursday Ajay Devgn got into a war of words with Kichcha Sudeepa after the latter’s comment on Hindi no longer being India’s national language.

As per media reports, during an event, Sudeepa stated that “Hindi is no more a national language.” Following this, Devgn took to his Twitter handle and expressed his views on Sudeepa’s comment.

Later, on hearing out Sudeepa’s side of the argument, Devgn thanked him for “clearing up the misunderstanding.” He tweeted, “Hi @KicchaSudeep, You are a friend. thanks for clearing up the misunderstanding. I’ve always thought of the film industry as one. We respect all languages and we expect everyone to respect our language as well. Perhaps, something was lost in translation “

Sudeepa responded to Ajay by writing, “Hello @ajaydevgn sir.. the context to why i said tat line is entirely different to the way I guess it has reached you. Probably wil emphasis on why the statement was made when I see you in person. It wasn’t to hurt, Provoke or to start any debate. Why would I sir.”

“I love and respect every language of our country sir. I would want this topic to rest,,, as I said the line in a totally different context. Much love and wishes to you always. Hoping to seeing you soon,” he added.