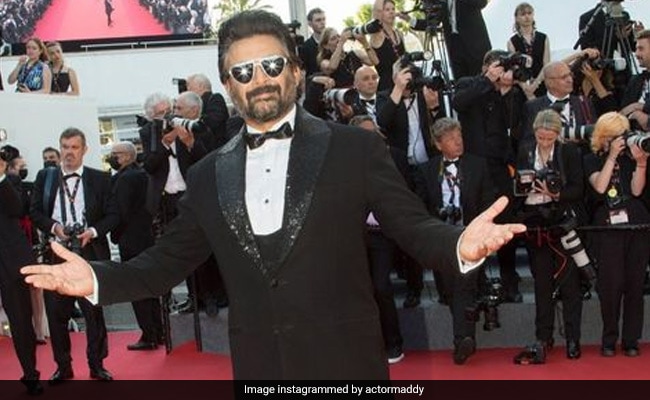 Cannes 2022 commenced on May 17 with a grand opening ceremony attended by all the jury members and other stars from across the entertainment industry. R Madhavan, whose upcoming film Rocketry: The Nambi Effect will be premiering at the Cannes on May 19, also walked the red carpet on Tuesday. The actor opted for ace designer Manish Malhotra’s ensemble for his first day at Cannes and looked absolutely dapper. He shared a happy post from the red carpet and thanked the designer for making him feel confident. In the image, he can be seen in a black tuxedo with a shimmery collar. He completed his look with classy sunglasses.

Sharing the post, R Madhavan wrote, “Only @manishmalhotra05 Can make an already special and memorable day even more special. Thank you for making me feel so good about myself. My confidence soared because of you guys . Thank you @manishmalhotraworld . Styled by – @priyanjalirajlaxmisingh Shoes- @dolcegabbana #RocketryAtCannes”

R Madhavan also shared a video of the opening ceremony and captioned it as, “Opening Ceremony at Cannes. 17/5/22. In the video, Union Minister Anurag Thakur can also be seen sitting next to the actor.

Talking about R Madhavan’s upcoming film Rocketry: The Nambi Effect, the film is based on the life of a former ISRO scientist Nambi Narayanan, who was falsely accused of espionage. The film is slated to release in the theatre on July 1, 2022.