Apart from mommy duties, Priyanka Chopra is busy putting some ‘futile’ efforts into bringing a once-popular fashion trend back and her latest picture on Instagram is proof!

Actress Sofia Barclay shared a photo of the Bollywood actress where she is seen posing with her cap positioned sideways. Her ever enchanting smile compliments her overall gorgeous look.

Check out the photo here: 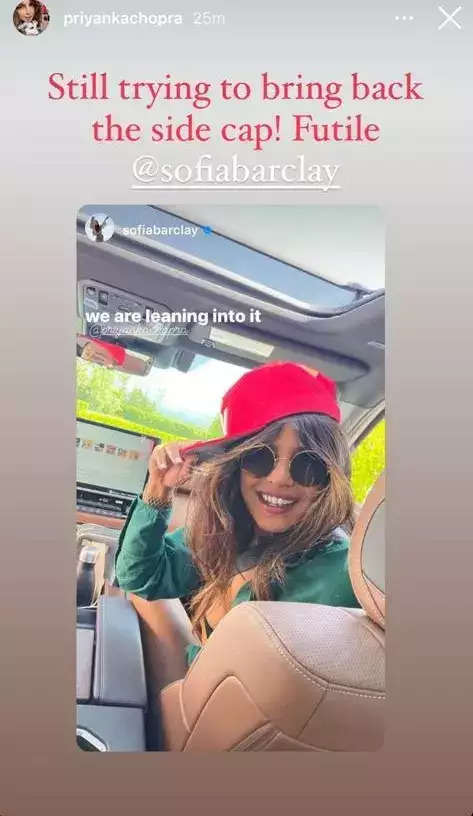 Dressed in a green outfit and cool sunglasses, Priyanka looked stunning as ever in the photo. Sofia captioned it as, ‘We are leaning into it’. Sharing her post on her Insta story, PeeCee wrote, ‘Still trying to bring back the side cap! Futile’

The 39-year-old had announced the arrival of her first child on January 22. She had written in a note, “We are overjoyed to confirm that we have welcomed a baby via surrogate. We respectfully ask for privacy during this special time as we focus on our family. Thank you so much.”

Although the couple has not yet officially announced the gender, name and other details related to their newborn baby, various reports regarding the same have been doing the rounds in the media. According to reports, Priyanka and Nick have become parents to an adorable baby girl and they have named their bundle of joy ‘Malti Marie Chopra Jonas’.

Meanwhile, on the work front, Priyanka will next be seen in Farhan Akhtar’s ‘Jee Le Zaraa’ where she will be sharing the screen space with none other than Katrina Kaif and Alia Bhatt for the first time.