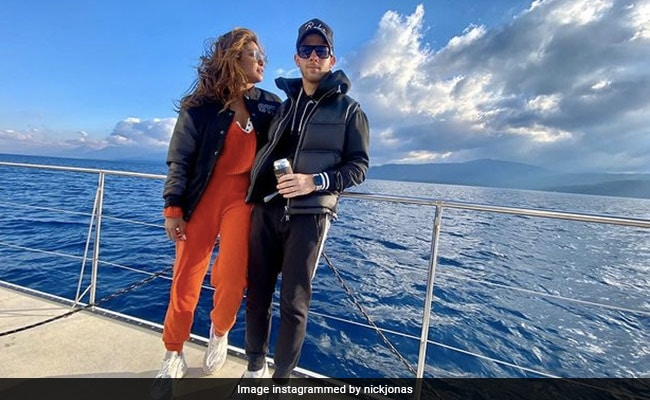 Straddling the border of California and Nevada, Lake Tahoe is the current destination for Priyanka Chopra and Nick Jonas. After glimpses of the couple’s getaway landed on the Internet, Nick Jonas brought forth a beautiful moment of the duo hanging out on a yacht. On Tuesday, Nick shared two pictures of them enjoying the sun and each other’s company. In the caption, Nick called it, “Magic hour.” In the first picture, Nick poses for the camera while Priyanka, dressed in an orange outfit and a bomber jacket, gazes into the distance. The second picture has the actress resting her head on Nick’s shoulder.

A few days ago, Priyanka posted a beautiful picture with her baby girl Malti Marie and friend Tamanna Dutt along with her son. However, Priyanka concealed her daughter’s face with a white heart emoji for privacy reasons. In the caption, she celebrated her 22-year-long friendship with Tamanna and wrote, “22 years and counting.. and now with our babies…love you,” and added the hashtags #bestfriends, #Godson #friendslikefamily.

Take a look at it below:

On Saturday, Nick and Priyanka attended the American Century Championship (ACC) golf tournament, a celebrity tournament in the US. The Sky Is Pink actress cheered for her husband while he played at the event, which is held every year in the second week of July at Edgewood Tahoe Golf Course. A video of Priyanka signing autographs for her fans cropped up online and has been doing the rounds of the Internet.

Meanwhile, on the work front, Priyanka will star in the upcoming Hollywood film, It’s All Coming Back To Me with Sam Heughan and Celine Dion. Nick, on the other hand, who is a part of the musical trio Jonas Brothers, started a TV show with international singer Shakira called Dancing with Myself.