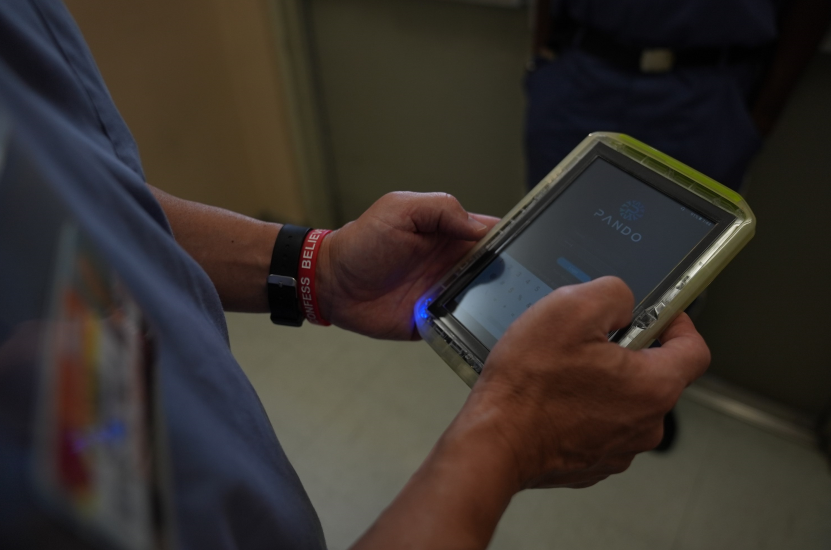 One prison ministry is helping inmates get connected to Christ through a mobile app that provides access to sermons, devotionals, worship music, and more.

God Behind Bars works to restore the lives of inmates while they’re incarcerated and after their release by building their faith.

The ministry created Pando in January 2021, an app that allows inmates to stream Christian content while using a prison tablet. Pando is also free to download on Google Play and the App Store so that inmates and their families can watch the same material.

Isaac Holt, Director of Innovation for God Behind Bars, told CBN News that use of the app is growing with 70 churches adding new content every week.

“We dreamed of wanting to get to more prisons,” he told CBN News. “We wanted to make a bigger impact, but it’s hard to get into them. It took a year and a half to research and try things, then we finally figured out how to do it.”

Holt said Wifi access is the ministry’s biggest challenge because some states have newer technology and terms vary from state to state.

“When the tablet is plugged into the charging station, it connects to Wifi, allowing 4,000 videos to be watched on the app,” he explained.

God Behind Bars partners with different companies that supply tablets to prisons. The ministry pays for the download of Pando onto the tablet so it is free for inmates to use.

Holt says Pando is the only free app inside of prisons and the only one that can come preinstalled on the tablets.

The Las Vegas-based ministry also partners with local churches across the nation to basically put a satellite campus inside prisons.

“We are in 26 states coast to coast and the app is being used in 250 plus prisons and jails,” Holt told CBN News.

“We just launched our 53rd church location behind bars with 22 more locations launching in the next 12 months,” he added.

Holt also emphasized the positive impact that Pando is having on inmates.

“Every church in the app is receiving about 100 letters a month from inmates using the app. Inmates can accept Christ on the app, which walks them through what Jesus looks like.”

Pando also allows inmates to watch The Chosen series and utilize the Bible Project, which breaks down every book in the Bible to make it easier to understand.

Holt shared a story about a Florida prison inmate whose bunkmate watched The Chosen on the app. Holt said the man accepted Jesus Christ as his Lord and Savior and started coming to church in prison.

In another praise story, Holt recalled how the app influenced a former inmate to seek out the same church he watched while incarcerated.

“An inmate watched a sermon from Elevation Church. He was released from jail and said, ‘I need to go to that church.’ The first person he met at the church was a volunteer who was also a warden at a prison,” Holt said.

Holt explained that the former inmate was then introduced to another church volunteer who was able to secure him a job, which he started the next day.

“That former inmate accepted Christ and got baptized a couple of weeks later,” Holt recalled.

God Behind Bars also films inmates singing their favorite worship song, which they share on their social media sites.

And the ministry is working on an event for this fall where they hope to reunite 100 incarcerated inmates with their children.

To find out more about God Behind Bars and Pando, click here.