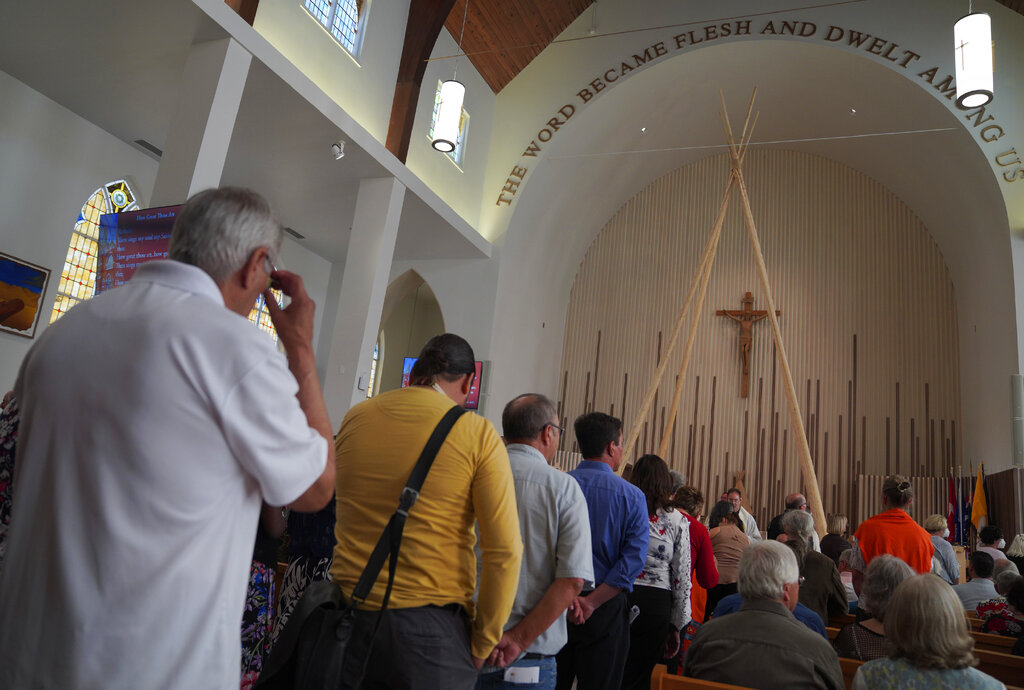 VATICAN CITY (AP) — Pope Francis’ trip to Canada to apologize for the horrors of church-run Indigenous residential schools marks a radical rethink of the Catholic Church’s missionary legacy, spurred on by the first pope from the Americas and the discovery of hundreds of probable graves at the school sites.

Francis has said his weeklong visit, which begins Sunday, is a “penitential pilgrimage” to beg forgiveness on Canadian soil for the “evil” done to Native peoples by Catholic missionaries. It follows his April 1 apology in the Vatican for the generations of trauma Indigenous peoples suffered as a result of a church-enforced policy to eliminate their culture and assimilate them into Canadian, Christian society.

Francis’ tone of personal repentance has signaled a notable shift for the papacy, which has long acknowledged abuses in the residential schools and strongly asserted the rights and dignity of Indigenous peoples. But past popes have also, in the same breath, hailed the sacrifice and holiness of the European Catholic missionaries who brought Christianity to the Americas — something Francis, too, has done but isn’t expected to emphasize during this trip.

Cardinal Michael Czerny, a Canadian Jesuit who is a top papal adviser at the Vatican, recalled that early on in his papacy, Francis asserted that no single culture can claim a hold on Christianity, and that the church cannot demand that people on other continents imitate the European way of expressing the faith.

“If this conviction had been accepted by everyone involved in the centuries after the ‘discovery’ of the Americas, much suffering would have been avoided, great developments would have occurred and the Americas would be all-around better,” he told The Associated Press in an email.

The trip won’t be easy for the 85-year-old Francis or residential school survivors and their families. Francis can no longer walk without assistance and will be using a wheelchair and cane because of painful strained knee ligaments. Trauma experts are being deployed at all events to provide mental health assistance for school survivors, given the likelihood of triggering situations.

“It is an understatement to say there are mixed emotions,” said Chief Desmond Bull of the Louis Bull Tribe, one of the First Nations that are part of the Maskwacis territory where Francis will deliver his first sweeping apology on Monday near the site of a former residential school.

The Canadian government has admitted that physical and sexual abuse were rampant in the state-funded, Christian schools that operated from the 19th century to the 1970s. Some 150,000 Indigenous children were taken from their families and forced to attend in an effort to isolate them from the influence of their homes, Native languages and cultures.

The legacy of that abuse and isolation from family has been cited by Indigenous leaders as a root cause of the epidemic rates of alcohol and drug addiction on Canadian reservations.

“For survivors from coast to coast, this is an opportunity — the first and maybe the last — to perhaps find some closure for themselves and their families,” said Grand Chief Georg Arcand Jr. of the Confederacy of Treaty Six in Maskwacis.

“This will be a difficult process but a necessary one,” he said.

Unlike with most papal trips, the diplomatic protocols of a state visit are taking a back seat to personal encounters with First Nations, Metis and Inuit survivors. Francis doesn’t even meet formally with Prime Minister Justin Trudeau until midway through, in Quebec City.

Francis is also ending the trip in unusual style, stopping in Iqaluit, Nunavut — the farthest north he’s ever traveled — to bring his apology to the Inuit community before flying back to Rome.

As recently as 2018, Francis had refused to personally apologize for residential school abuses, even after Canada’s Truth and Reconciliation Commission in 2015 documented institutional blame and specifically recommended a papal apology to be delivered on Canadian soil.

Trudeau traveled to the Vatican in 2017 to appeal to Francis to apologize, but the pontiff felt “he could not personally respond” to the call, Canadian bishops said at the time.

What changed? The first pope from the Americas, who has long defended the rights of Indigenous peoples, had already apologized in Bolivia in 2015 for colonial-era crimes against Native peoples in the region.

In 2019, Francis — an Argentine Jesuit — hosted a big Vatican conference on the Amazon highlighting that injustices Native peoples suffered during colonial times were still continuing, with their lands and resources exploited by corporate interests.

Then in 2021, the remains of around 200 children were found at the site of what was once Canada’s largest Indigenous residential school, in Kamloops, British Columbia. More probable graves followed outside other former residential schools.

“It was only when our children were beginning to be found in mass graves, garnering international attention, that light was brought to this painful period in our history,” said Bull, the Louis Bull Tribe chief.

After the discovery, Francis finally agreed to meet with Indigenous delegations this past spring and promised to come to their lands to apologize in person.

“Obviously there are wounds that remained open and require a response,” Vatican spokesman Matteo Bruni said, when asked about the evolution of the papal response.

One of those wounds concerns the papal influences in the so-called Doctrine of Discovery, the 19th-century international legal concept that is often understood as legitimizing European colonial seizure of land and resources from Native peoples.

For decades, Indigenous peoples have demanded the Holy See formally rescind the 15th century papal bulls, or decrees, that gave European kingdoms the religious backing to claim lands their explorers “discovered” for the sake of spreading the Christian faith.

Church officials have long rejected those concepts, insisted the decrees merely sought to ensure European expansion would be peaceful, and said they had been surpassed by subsequent church teachings strongly affirming the dignity and rights of Indigenous peoples.

But the matter is still raw for Michelle Schenandoah, a member of the Oneida Nation Wolf Clan, who was the last person to address the pope when the First Nations delegation met with him March 31.

Wearing a cradle board on her back to represent the children whose lives were lost in residential schools, she told him the Doctrine of Discovery had “led to the continual taking of our babies.”

“It deprived us of our dignity, our freedom, and led to the exploitation of our Mother Earth,” she said. She begged Francis to “release the world from its place of enslavement” caused by the decrees.

Asked about the calls, Bruni said there was an articulated “reflection” under way in the Holy See but he didn’t think anything would be announced during the trip.

- Advertisement -
This post contains affiliate links. If you use these links to buy something we may earn a commission. Thanks.”
Facebook
Twitter
Pinterest
WhatsApp
Previous articleRicky Martin breaks silence about nephew’s sexual relationship claims | Ents & Arts News
Next articleEXCLUSIVE! Ajay Devgn on winning his third National Award: Tanhaji: The Unsung Warrior was special because it came together so beautifully | Hindi Movie News