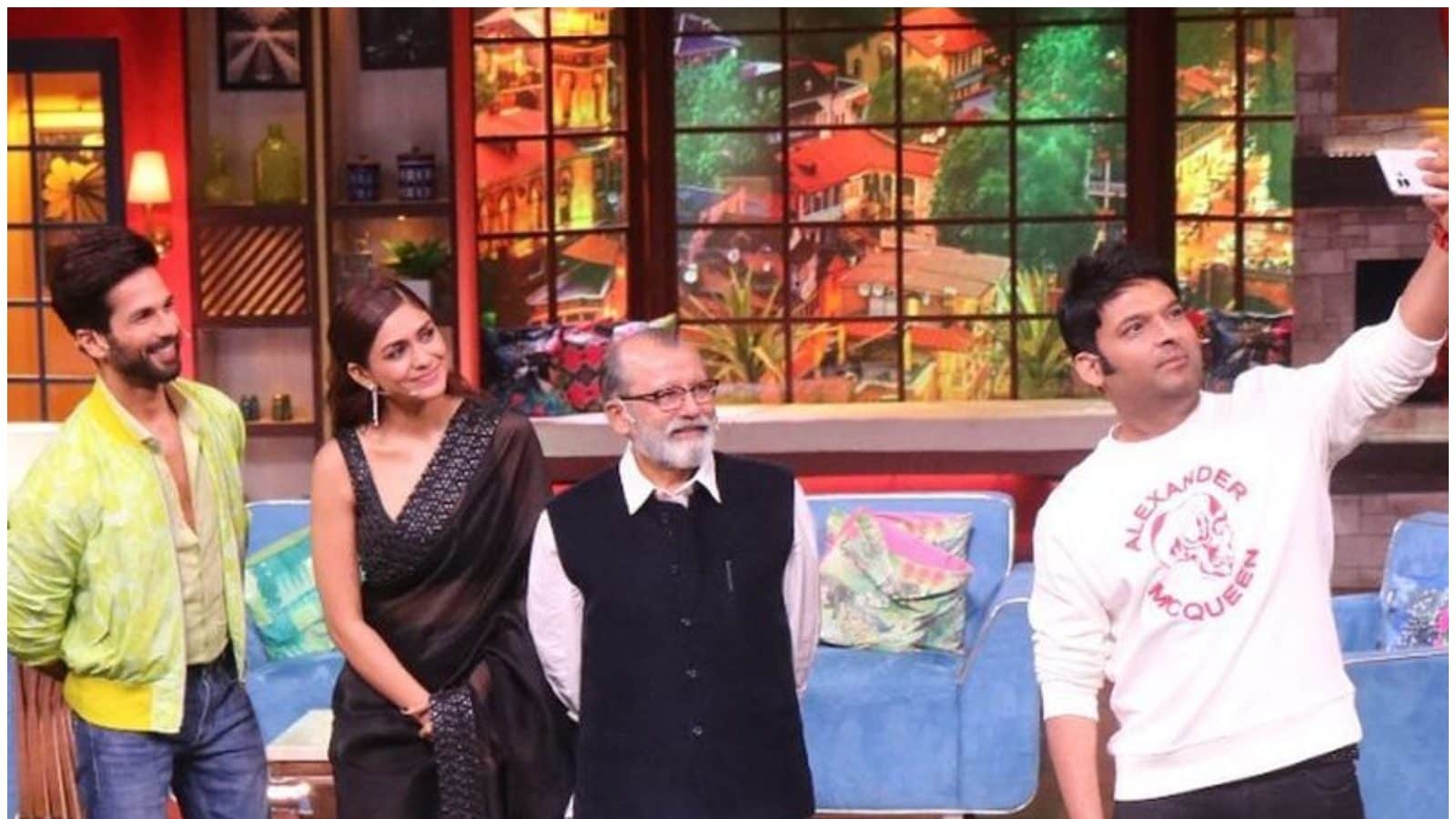 
Jersey actors Shahid Kapoor, Mrunal Thakur and Pankaj Kapur appeared on this week’s episode of The Kapil Sharma Show. Show host Kapil Sharma invited Shahid and Mrunal on stage at first and promptly asked Mrunal about her giving Shahid a piece of her mind, “Kyu cricket khelne se rok rahi hain aap, safed jersey aapko dhoni padti hai isiliye? (Why are you scolding him, because you have to wash his white jerseys)?”

Mrunal innocently retorted that she managed everything from her personal life to her job and to paying the bills in the house. Shahid interrupted and said, “Main karunga film mein kaam, aisa mat sochna ki kuch karega hi nahi yeh picture ke andar. Itna nalayak bhi nahi hun (I will work in the film, don’t think that I will not do anything. I’m not useless)” which left viewers in a fit of hysteric giggles.

Kapil then asked veteran actor and Shahid’s father Pankaj Kapur on to the stage. He turned to Shahid and said, “Meri toh halat kharab ho gayi hai. Aap Shahid ko bhi dekh lo! Aise khada hai jaise PTA meeting mein papa bina bataye aa gaye (I am in awe of Pankaj sir, but look at Shahid. He is standing like a kid whose father has arrived at the parent-teacher-meeting unannounced).”

Pankaj then talked about how he always watched a guy in a dhoti on television. He acknowledged that this man was very talented and skilled and that he always talked about him to his director friends. “Aaj main ussi ladke ke show pe khada hun (Today I’m standing at that guy’s show).” This made Kapil proud and happy and he thanked Pankaj for his kind words.

Pankaj kept going on about how Shahid had always loved cricket and how he was always very philosophical as a boy. He recounted an incident when a young Shahid had asked, “Baba, aapko pata hai main aapse kitna pyaar karta hun (Dad, you know how much I love you)”? When Pankaj asked him how much, Shahid philosophically said, “Jitna khuda apne bando se karta hai (As much as God loves his kids)”.

Kapil then asked Pankaj Kapur if he was more mischievous than his son. Pankaj replied, “I will say the truth, or at least I will try, I was mischievous of course but he has one mischievous quality that my grandson (Zain) has too. The quality is that after committing the mischief, they turn and look at you as if saying, ‘Ab batao? (what do you have to say now?)’. He (Shahid Kapoor) used to be like, ‘Did you recognise what I did?’ and that same quality is in my grandson. He’ll pick something up and throw it after which he’ll look at us and be like ‘ab batao?’.”

Zain is Shahid’s younger child with wife Mira Rajput. They have a daughter too, named Misha.