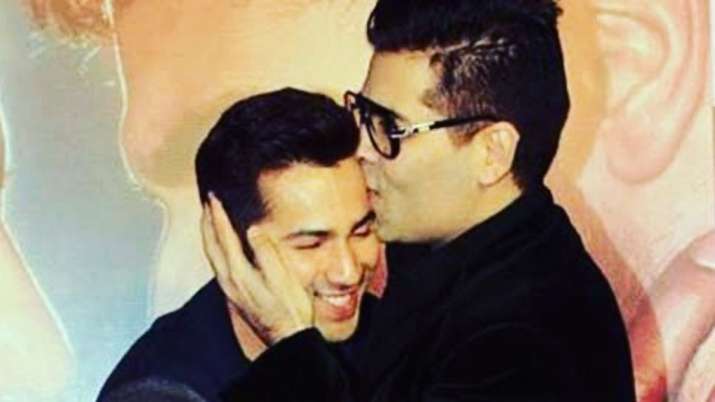 
Varun Dhawan is celebrating his 35the birthday on Sunday (April 24). On the special occasion, several celebrities from the film industry took to their social media to wish Varun. The actor, who will soon complete a decade in the industry with the tenth anniversary with the first instalment of, ‘Student of the Year’, has been mentored by the Dharma productions head-honcho, Karan Johar and the two share a special bond of a guru and student.

Taking to his Instagram, KJo, posted a throwback picture of himself and birthday boy from what looks like a promotional event for Varun’s 2015 release, ‘Badlapur’ where he shared the screen with Nawazuddin Siddiqui, Yami Gautam, Radhika Apte and Vinay Pathak. In the picture, Karan can be seen giving a peck to Varun on his forehead. Alongside this, he wrote “Chalo thodi publicity bhi ho jaye aur lage haath shubhkamna wala wish bhi de hi doon! Janmadin mubarak Varun aka Kuku! #jugjuggjeeyo (let’s publicise your birthday along with the best wishes, happy birthday Varun aka Kuku).”

“Dil ke bade ho tum, Bhediya jungle ke, (you have a heart of gold and you’re the wolf of the jungle) I love you mere student now and everyday! One more time for love #jugjuggjeeyo,” he concluded his post.

Farah Khan, who is Karan’s close friend, pulled his leg by comparing her rhyming to that of Anu Malik, who is known for his rib-tickling rhymes. She wrote in the comments section, “Anu malik has strict competition!! happy birthday @varundvn.” Varun expressed his love for Karan in the comments as he wrote, “Karan” followed by heart emojis.