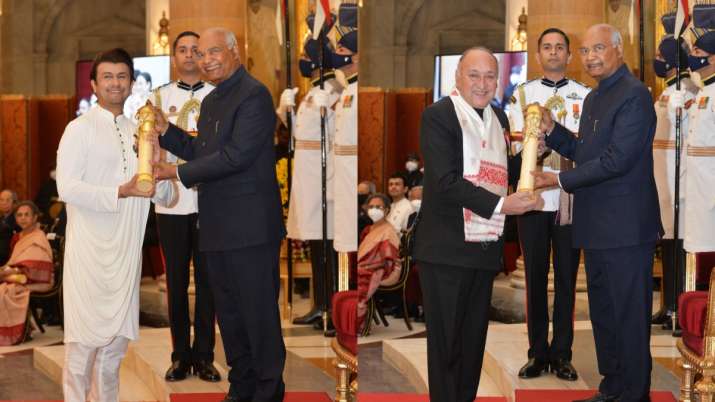 Bollywood singer Sonu Nigam and veteran Bengali actor Victor Banerjee were among the 35 personalities who were conferred with the Padma Shri and Padma Bhushan Awards respectively under the Arts category in 2022. Sonu Nigam is a popular and successful playback singer of Hindi Cinema, is also a recipient of several accolades, including a National Film Award his singing of the title track of the 2003 romantic film ‘Kal Ho Naa Ho. Nigam sings predominantly in Hindi and Kannada language films but has also sung in Odia, Bengali, Gujarati, Tamil, Telugu, Marathi, Nepali, Malayalam, Kannada, Bhojpuri, and other Indian languages.

President Ram Nath Kovind presented Padma awards for the year 2022 at the Civil Investiture Ceremony-II at Rashtrapati Bhavan today. This year’s list of Padma Awards includes four Padma Vibhushan, 17 Padma Bhushan and 107 Padma Shri Awards. Thirty-four of the awardees are women and the list also includes 10 persons from the category of Foreigners/NRI/PIO/OCI and 13 Posthumous awardees.

Also read: Sonu Nigam dedicates Padma Shri award to his mother, says ‘had she been here today, she would have cried’

The award seeks to recognize achievements in all fields of activities or disciplines where an element of public service is involved. The Padma Awards are conferred on the recommendations made by the Padma Awards Committee which is constituted by the Prime Minister every year.