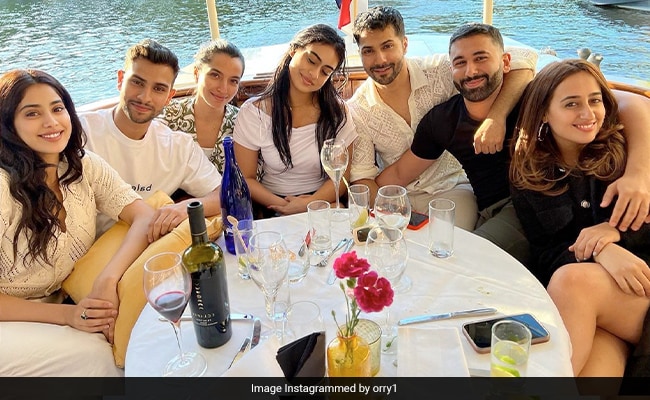 Ajay Devgn and Kajol’s daughter Nysa Devgn,19, is making the most of her holiday in Europe. From London to Spain and then Amsterdam, Nysa’s pictures are doing the rounds of the Internet for the past few weeks. Her friend Orhan Awatramani posted new pictures from their European holiday along with Janhvi Kapoor, Varun Dhawan and Natasha Dalal in Amsterdam. Janhvi Kapoor and Varun Dhawan are shooting for their film Bawaal in Europe. After wrapping a schedule in Amsterdam, they headed to Poland. However, Orhan shared some throwback pictures when they were in Amsterdam and wrote, “When you feel so tired but you can’t sleep.”

In the pictures, Nysa looks stunning in a pink top with denim shorts and white shoes. The string of images also shows a special lunch outing of the group with Nysa, Janhvi, Varun and Natasha sharing the frame.

Take a look at the pictures below:

Earlier, Orhan had shared pictures with Nysa in Spain. While in Barcelona, the post shows Nysa having a fun time with her friends at Casa Batllo, a monumental building in the centre of the city.

Janhvi, too, had shared pictures with Nysa and their friends while she was in Amsterdam and simply captioned the images “amstagram.” A picture features Janhvi and Nysa catching up over a meal with their friends.

On Nysa’s birthday this year, Ajay Devgn shared a beautiful picture of his daughter and wrote, “Hey daughter, you are special. Today, tomorrow, forever. Happy birthday Nysa. Privileged to have you.”