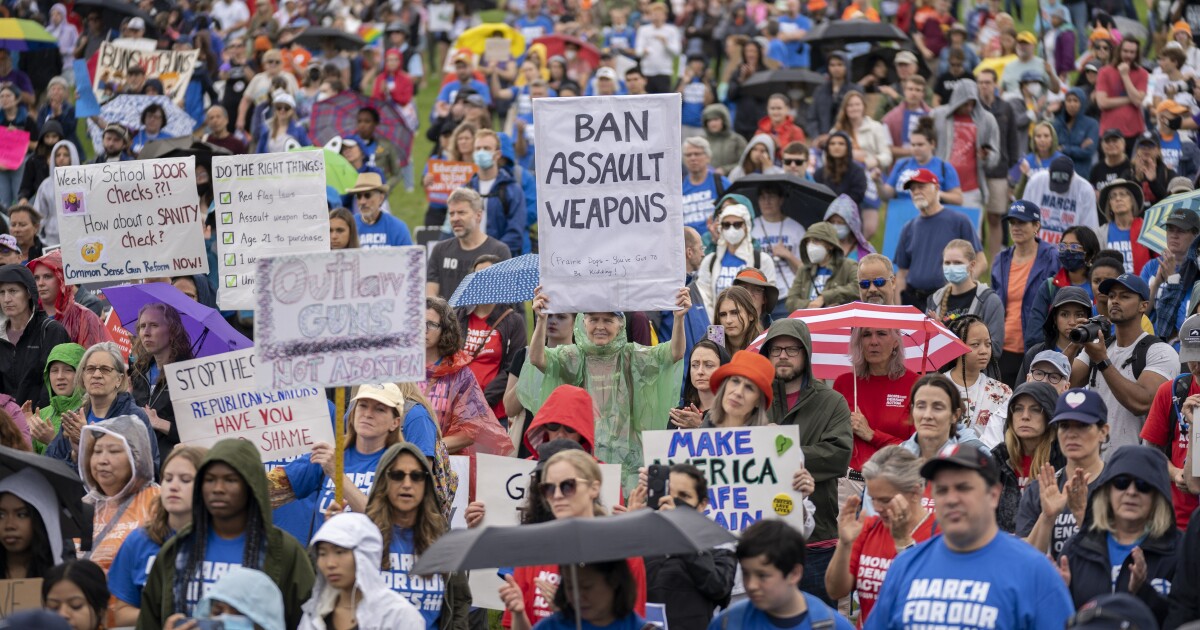 Newsom started a game of legal chess in December when he called for gun control legislation in California modeled after a Texas law that authorizes private citizens to sue anyone who aids and abets in an abortion, which the high court declined to block.

State Sen. Bob Hertzberg (D-Van Nuys) and a coalition of Democratic lawmakers introduced Senate Bill 1327 in response to Newsom’s request as a way to test the Supreme Court’s legal logic, while setting up a political rivalry with states that have used a conservative majority of justices to expand gun ownership and curb abortion rights.

“While the Supreme Court rolls back reasonable gun safety measures, California continues adding new ways to protect the lives of our kids,” Newsom said in a statement. “California will use every tool at its disposal to save lives, especially in the face of an increasingly extreme Supreme Court.”

The legislation, set to go into effect in January, will allow private people to sue anyone who imports, distributes, manufacturers or sells illegal firearms in California, such as assault weapons, .50 BMG rifles and so-called ghost guns. The law requires a court to order $10,000 in damages for each weapon used in an alleged violation, along with attorneys fees. The bill was written so that if Texas’ law is nulled, California’s would similarly be invalidated.

Newsom placed SB 1327 at the top of a list of more than a dozen bills he prioritized this year to help address a national crisis of mass shootings and to further limit the gun industry’s already restricted influence in California. Newsom signed another measure this month to establish a “firearm industry standard of conduct” and allow local governments, the state Department of Justice and gun violence survivors to sue for violations of state law. Other bills he signed limit firearm advertising to minors, crack down on ghost guns and require school officials to investigate credible threats of mass casualty on campus.

Proponents billed SB 1327 as a way to curtail gun violence by enlisting the legal help of private residents in stopping the spread of prohibited firearms in the Golden State.

The Texas statute that inspired California’s law allows citizens to sue abortion providers and anyone who helps a woman to obtain an abortion after five or six weeks of pregnancy.

Lawsuits against many, if not all of, the bills are expected, with several gun ownership groups citing the policies as an infringement on 2nd Amendment rights.

“It is obvious that this is a retaliation against lawful gun owners and the court because of the Texas decision,” said Sam Paredes, executive director of Gun Owners of California. “There’s a full expectation that the firearms industry will have a very strong reaction towards the signing of this bill.”

“They are really, really trying to be nothing but vindictive against lawful people in the firearms industry,” Paredes added. “All of our attorneys are in the process of evaluating what we are going to do on this thing.”

When the Supreme Court upheld the Texas law, some 2nd Amendment advocates voiced fears it could be used against them by gun-control advocates, with Erik Jaffe, a lawyer for the Firearms Policy Coalition, calling the decision a vehicle for “deterring the exercise of any and all rights.”

But other legal experts question whether California’s strategy to mimic the Texas abortion ban will render the same outcome, if it is brought before the Supreme court’s conservative majority.

“One big difference between this law and Texas’ [abortion ban] is the likely opinion of the Supreme Court,” said Adam Winkler, a UCLA law professor with expertise in 2nd Amendment issues.

Winkler pointed to the Supreme Court’s recent decisions that struck down abortion rights guaranteed in Roe vs. Wade and a New York law that restricted concealed carry as evidence against its likelihood in upholding California’s new private right to action.

“The Supreme Court is much more likely to strike down California’s law than the Texas law. We now know one of the reasons the Texas law was not struck down is the court, within a matter of months, would overturn Roe vs. Wade,” Winkler said. “The same court is expanding 2nd Amendment rights and is now likely to take a ban on assault weapons as unconstitutional.”

Shilpi Agarwal, legal director at the ACLU of Northern California, said the group doesn’t object to what the bill aims to accomplish in limiting access to illegal firearms. Instead, Agarwal said the ACLU disagrees with circumventing the courts by allowing a private right to action as a way to enforce those restrictions, which could essentially establish a “constitutional arms race” with other states.

“The federal constitution creates the floor on our rights that states can’t go below. That is what ensures that all citizens, no matter what state they live in, enjoy a baseline level of rights, which courts then enforce,” Agarwal said. “[Texas’ abortion ban] is meant to create a trap door in that floor. And now other states are creating their own trap doors. California is creating one as well. And with all of these trap doors, the floor becomes meaningless.”

A legislative analysis of the bill cautioned that replicating a Texas-style private enforcement strategy “may be flawed and dangerous,” and noted that California already “tightly controls, regulates, and criminalizes activities related to restricted firearms.”

Hertzberg said the strategy is still worth trying.

“We don’t like the framework, but if we can take advantage of it and save lives, why is that wrong?” he said.

Newsom said recently that SB 1327 is a way to “go right to the heart of private right of action to where the Supreme Court is on abortion.”

“The question is whether they are complete and abject hypocrites and frauds if they reject our bill that is modeled after that abortion bill, as it relates to private right of action to go after assault weapons in California.”