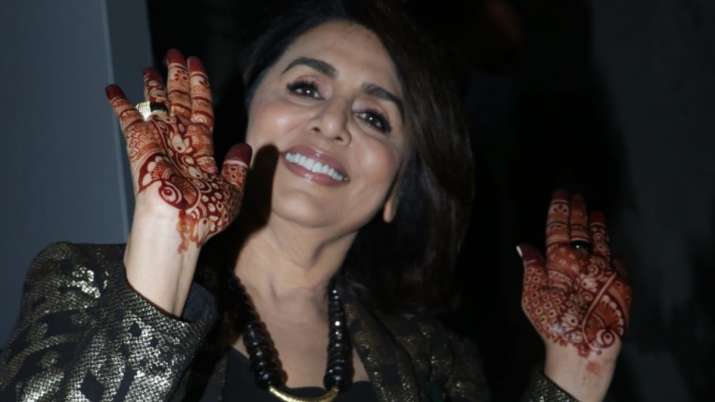 Bollywood A-listers Alia Bhatt and Ranbir Kapoor got married on Thursday. Thiers was not in a big fat Indian wedding but a small affair at their apartment with just family and close friends in attendance. After the wedding festivities wound up, Ranbir’s mother Neetu Kapoor was back in work mode as she started shooting on Friday, a day after the family event.

Read: Ranbir-Alia’s intimate dance on Chaiyya Chaiyya at their after-party will melt your heart | WATCH

She was snapped on the set of Hunarbaaz, as she shot some promotional scenes for her upcoming dance reality show. Neetu is on the panel of judges on Dance Deewane Juniors’which also includes actress and dancer Nora Fatehi and Bollywood choreographer Marzi Pestonji while Karan Kundrra is the host of the show.

Outside the set, Neetu showed off her mehendi and posed happily for photographs. She wore a printed black co-ord set and looked pretty. Neetu is one of the judges on the upcoming reality show Dance Deewane Junior as she was seen fulfilling her work commitments after doing her family duties of welcoming the bahu into the Kapoor family.

After Ranbir married Alia, Neetu on Friday penned a heartfelt note for late husband Rishi Kapoor. Taking to Instagram a day after her son’s wedding, Neetu said her late husband, Bollywood actor Rishi Kapoor’s wish has been fulfilled. “This is dedicated to kapoor Saab your wish has has been fulfilled (sic),” she wrote along with a photo of her with Ranbir Kapoor from the wedding.

Rishi Kapoor passed away in April 2020 after a battle with cancer. It was one of his wishes to see Ranbir getting married to Alia. Reportedly, the veteran actor had even planned a grand wedding for them in December 2020, but he passed away before that.