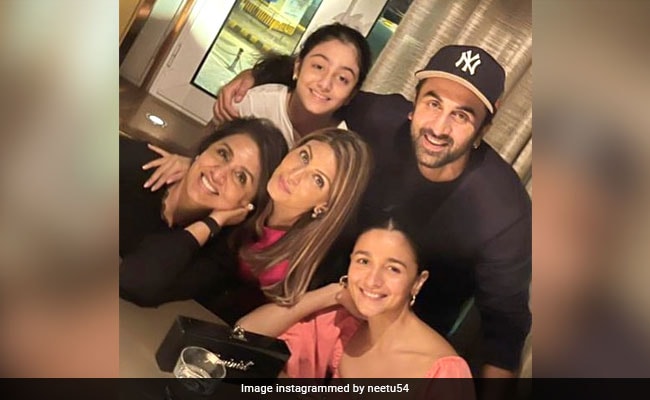 Neetu Kapoor is gearing up for the release of her upcoming film Jugjugg Jeeyo, co-starring Varun Dhawan, Kiara Advani and Anil Kapoor. Helmed by Raj Mehta, the film will mark her comeback to the silver screen after the death of her husband, veteran actor Rishi Kapoor. Speaking to NDTV, the actress revealed that before signing Jugjugg Jeeyo, she consulted son Ranbir Kapoor and daughter-in-law Alia Bhatt. She also revealed that when Karan Johar offered her the film, she was in a bad place emotionally and it was Ranbir who encouraged her to start working.

“I was going through a very bad state at the time. Ranbir and Karan were at my house and Ranbir said, “Mom what are you going to do now, you should start working” and Karan said, “Can I come tomorrow with a script?” Just a day after that he and Raj came. The script was so good. Even in that state of mind, what I was going through, I was stunned at how well it was written. The scenes were beautiful, the dialogues were so powerful, I said I’m doing it. It was so lovely. It’s the script that draws you, everybody was drawn towards the script,” Neetu Kapoor told NDTV.

When asked if she consults her family on scripts, Neetu Kapoor quipped that it is usually the other way around – Ranbir and Alia usually ask her for a second opinion. She did, however, involve them while taking on Jugjugg Jeeyo. “My family usually asks me, like a second opinion, but not always. So whenever they have a doubt, they’ll give me the script and I will go through it. But I did share it with both of them – Ranbir and Alia,” Neetu Kapoor said.

Soon after, Varun Dhawan asked if she shared the script with her daughter Riddhima Kapoor Sahni. To this, Neetu said, “Riddhima has no clue. For her, whatever mom does is the best.”

Produced by Karan Johar’s Dharma Productions, Jugjugg Jeeyo is slated to hit the theatres on June 24, 2022.