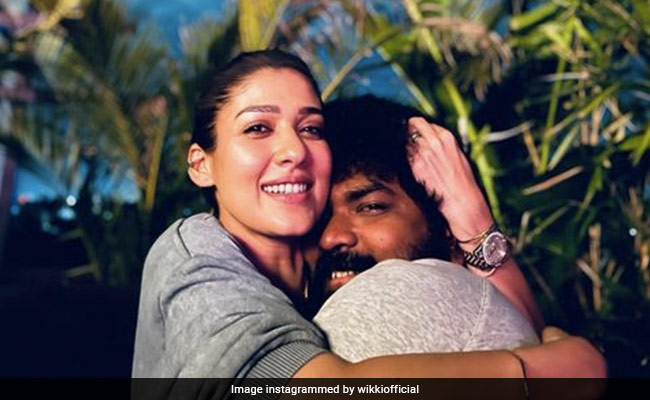 Vignesh Shivan has treated his Insta family to a new picture of him with his wife Nayanthara, and we are in awe of the couple. The director has dropped an adorable photo that shows them sharing a warm hug as they look into the camera. Vignesh Shivan and Nayanthara got married on June 9 and recently returned from their honeymoon. In the image, the couple is twinning in grey t-shirts and in the background, we can see a clear blue sky and palm trees. In the captions, he dropped the lyrics of the song Naan Pizhai from his recently released movie Kaathuvaakula Rendu Kaadhal. He wrote, “Naan pirandha dhinamaey (the day I was born)”.

Earlier, on Saturday, Vignesh Shivan shared two adorable photos on his Instagram handle in which they can’t take their eyes off each other. In the image, the couple is posing in front of a wall with a pink neon signboard that reads, “away with me”. Sharing the post, he captioned it as, “nenacha thonum idameyyy ( a memorable place)”. Check out the post below:

Sharing the dreamy wedding pictures, Vignesh captioned it as “On a scale of 10 … She’s Nayan & am the one By God’s Grace 🙂 jus married #Nayanthara”.

Meanwhile, on the work front, Nayanthara has several films in her kitty – Atlee’s Jawan with Shah Rukh Khan,  Godfather with Chiranjeevi and Gold, co-starring Prithviraj Sukumaran.