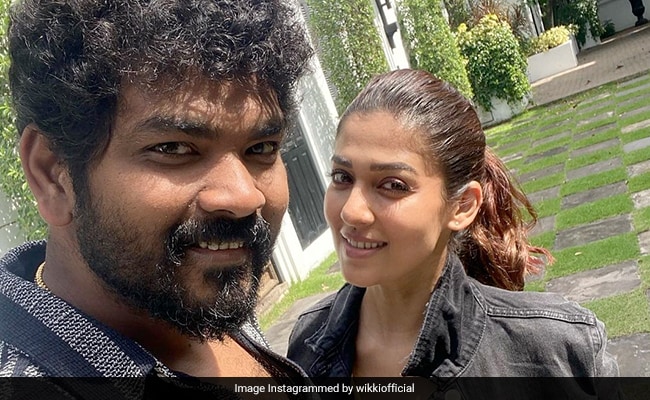 Honeymoon pictures of Nayanthara and Vignesh Shivan are still coming in. On Wednesday, Vignesh shared two selfies with his wife from Thailand where they jetted off after their wedding in Chennai. Sharing some fresh pictures of their honeymoon, Vignesh simply dropped a red heart, a lovestruck and a love emoticons. He also added some cute hashtags like “unwrap the world”, “vacation” and “unwrap Thailand”. The selfie featured a sun-kissed picture of the couple and the second image had them pose in front of a garden area. Nayanthara looked stunning in the selfie as she wore a black denim jacket and high-rise jeans.

Take a look at Vignesh and Nayanthara’s latest pictures:

On Monday, Vignesh posted some adorable glimpses with his wife soon from their honeymoon. Adding many loved-up emojis, Vignesh wrote in the caption, “In #Thailand with my Thaaram.” Nayanthara wore an easy breezy dress in the pictures and looked happy as she posed with her husband.

South power couple Nayanthara and Vignesh got married on June 9 at a private resort in Mahabalipuram, near Chennai. Many celebrities attended the wedding ceremony including Rajinikanth, Shah Rukh Khan, Atlee, Thalapathy Vijay and Ajith, among others.

On their wedding day, Vignesh posted beautiful clicks from the marriage ceremony and wrote, “On a scale of 10 … She’s Nayan & am the one…By God’s Grace 🙂 jus(t) married.”