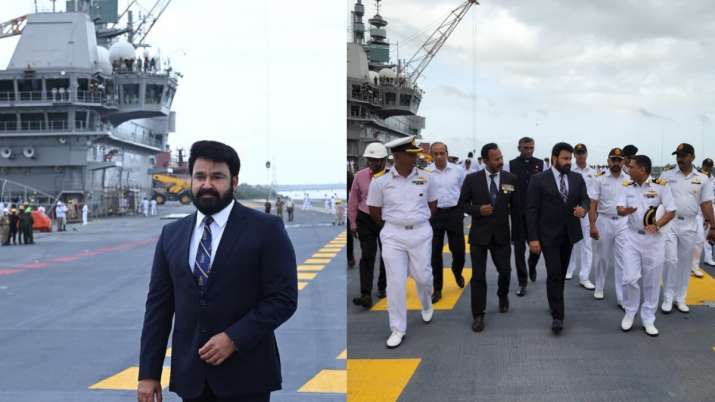 Mohanlal, who is also a Lieutenant Colonel in the Indian Army, visited India’s first Indigenous Aircraft Carrier (IAC) Vikrant which is soon to be commissioned, built in Cochin Shipyard Ltd. Mohanlal has called the battleship “a true engineering marvel” and expressed the wish that she always be victorious. Taking to Instagram to pen his thoughts on the visit to the aircraft carrier, Mohanlal said: “Honoured to be onboard India’s first Indigenous Aircraft Carrier (IAC), soon to be commissioned as Vikrant, built in Cochin Shipyard Limited, Kerala.

“After 13 long years of dedicated construction, she sets sail as a true engineering marvel that further fortifies the Indian Navy and speaks volumes about India’s shipbuilding capabilities. I express my heartfelt gratitude for this matchless opportunity, especially to the Commanding Officer, Commodore Vidhyadhar Harke, VSM, and Madhu Nair, the Chairman and Managing Director of Cochin Shipyard Limited, for their warm reception. Witnessing the unmatched peculiarities of this mean machine urges me to triumphantly salute all the people behind IAC Vikrant, the wonder. May she always be victorious at sea!” he added.

On the work front, for the first time in his career has decided to direct the film ‘Barroz: Guardian of D’Gama’s Treasure’. He is currently busy with his first directorial and will also be seen in Shaji Kailas’s film ‘Alone’. Other upcoming projects include ‘L2: Empuraan’ the sequel of ‘Lucifer’ Prithviraj Sukumaran’s directorial debut film Lucifer. The upcoming thriller ‘Monster’, by director Vysakh is also lined up for release.

Mohanlal is once again collaborating with Jeethu Joseph for upcoming drama, Ram. For the unversed, the film was announced in 202o but was pushed ahead due to COVID-19 pandemic. Reportedly, the shooting for the film has finally kickstarted in Kochi.