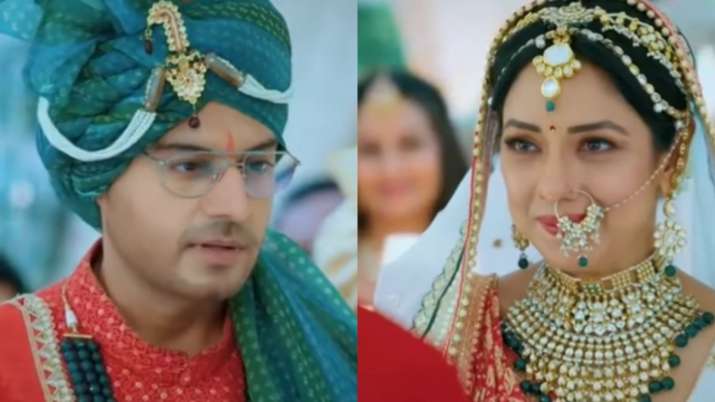 The moment has finally arrived which Anupamaa fans have been waiting for a long time. In the latest episode of the fan-favourite show, the long-awaited union of Anuj Kapadia (Gaurav Khanna) and Anupamaa (Rupali Ganguly) happened. Earlier, Rupali and Gaurav shared their looks from the ‘big day’ on social media and now, snapshots and videos from the ‘MaAn’ wedding are viral on social media.

After her divorce from Vanraj and the latter’s second marriage, Anupamaa has been shown to get closer to Anuj, her college mate. At last, Anuj confessed his love for Anupamaa and the latter accepted his proposal. After hiccups, mostly relating to family opposition, Anuj and Anupamaa sealed their love in the holy bond of matrimony.

As expected, this was one of TV’s most anticipated weddings and the hashtag ‘MaAn’ is viral on Twitter. Fans have been sharing stills from the latest episode of Anupamaa when the wedding takes place. #RuapliGanguly has also been trending with Anupamaa fans praising her wedding look.

Rupali wore a white lehenga with embroidery as Anupamaa. Her jewellery did wonders for her wedding look. Gaurav as Anuj opted for a red sherwani and looked every inch royal in his wedding outfit. Take a look at how fans are reacting to ‘MaAn’ wedding in the latest Anupamaa episodes.