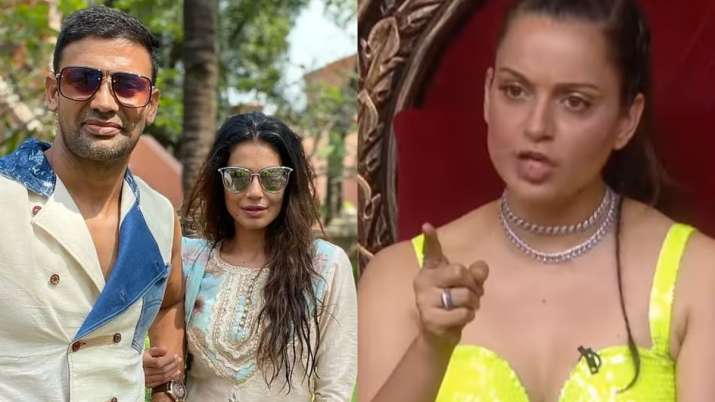 Common Wealth Champion wrestler Sangram Singh’s fiance Payal Rohatgi is one of the contestants in Kangana Ranaut‘s reality show Lock Upp. She has been grabbing eyeballs with her bold statement and disagreements with fellow contestants inside the lock-up. In the recent promo dropped by the makers, show’s host Kangana Ranaut was seen slamming Payal. She asked Payal to keep quiet. While Payal tried to give her reasons Kangana rebuked. The episode highlighted how Kangana was furious at Payal’s leadership because according to her, Payal does not allow anyone else to speak. Where Payal wanted to put forth the definition of leadership in her own words, Kangana fiercely admonished her. Payal asked Kangana to put her down from the leader’s role. Kangana said that the show belongs to her, and asked Payal to not tell her who to choose for leadership and who to drop.

This entire episode hasn’t gone down too well with Sangram Singh and he has come out in support of Payal. He questioned Kangana Ranaut for being unfair and hampering Payal’s mental health. He said, “The host is the parent of any show. Hosts are meant to be fair and give every contestant a chance to speak. Here Payal is not being allowed to speak and everyone verbally attack her.”

He also Added ” Poonam and Anjali abuse Payal but no one fires them for it. And Kangana seems to agree that abuses are justified. This is very unfair. You are killing someone’s self-confidence with such uncalled for behaviour.”

Payal recently talked about marrying her fiance Sangram on the show. Meanhwhile, Sangarm took to Twitter and announced that he will tie the knot with Payal Rohatgi, this year. He tweeted, “Payal is a very nice girl. We both are alike, yet different. Every couple should have the same mindset and lifestyle. We had planned a wedding in March but both had work commitments.  So we will get married closer to my birthday in July. God bless everyone”.

The couple has been dating each other for more than 8 years.

For the unversed, Payal and Sangram met each other in the reality show Survivor India. Narrating her story, Payal in an interview revealed that before meeting Sangram in the reality show, she had once met him when she was travelling from Delhi to Agra. Her car broke down on the highway and Sangram helped her then. After which, the two also shared phone numbers. But never called.

Also read: Lock Upp: Ali Merchant opens up to Payal Rohatgi about cheating on ex-wife Sara Khan when she was in Bigg Boss

Later, the duo fell in love with the reality show. Also, Payal and Sangram did a film together, called ‘Night’. Apart from this, both also participated in the dance reality show ‘Nach Baliye 7’ in the year 2015.