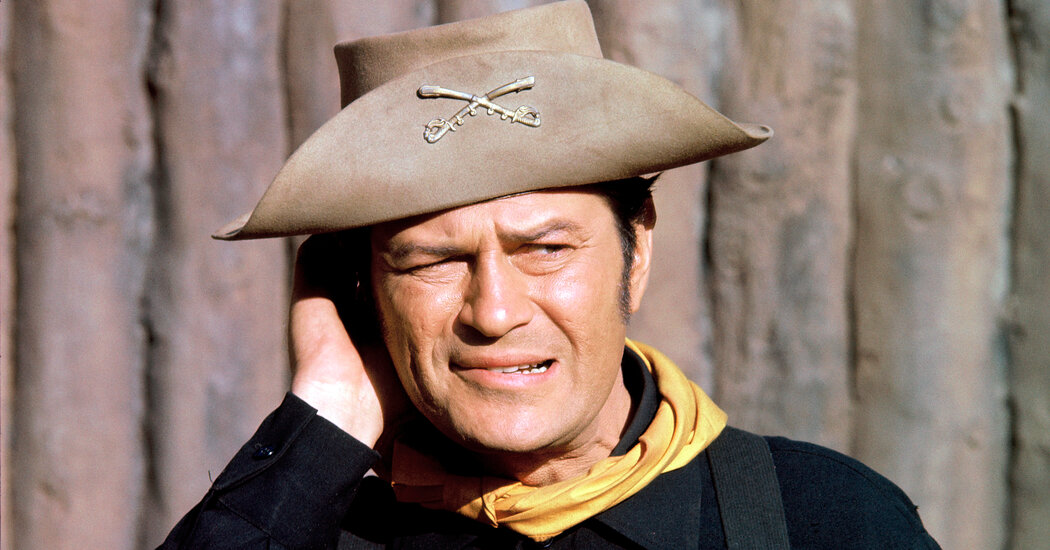 Larry Storch, who played a memorable television oddball on the 1960s sitcom “F Troop” and for years carried a secret in his personal life that was odd in an entirely different way, died on Friday at his home on the Upper West Side of Manhattan. He was 99.

Mr. Storch had a long career as a nightclub comic and as a character actor on the stage and the big and small screens. But his other work was dwarfed by the impression he made during the two-season run of “F Troop” on ABC, from 1965 to 1967.

The show was a slapstick comedy about an outpost called Fort Courage in Indian country just after the Civil War, and Mr. Storch played Cpl. Randolph Agarn, one of the bigger misfits in a unit full of them. Agarn and his business partner, Sgt. Morgan O’Rourke, played by Forrest Tucker, were constantly hatching moneymaking schemes, most of them involving the local Indian tribe, the Hekawis.

O’Rourke was the brains of the partnership; Agarn provided the idiocy, and Mr. Storch’s well-honed comic timing served him deliciously in the role. So did the mimicry skills he had honed in nightclubs, where his act included all sorts of impersonations: In various “F Troop” episodes he played not only Agarn but also assorted Agarn relatives, who somehow found their way to the fort from far-off locales. “I had cousins who came from Moscow, Mexico, Montreal,” Mr. Storch recalled in a 2009 interview.

“F Troop” wasn’t on long. But, like many sitcoms in that era of limited television choices, it burned itself into the minds of those who watched it, perhaps in part because it trafficked in the kinds of stereotypes — especially those hard-drinking, firewater-brewing Indians — that would soon disappear from television.

Mr. Storch, in a 2007 interview with The Asbury Park Press, credited Mr. Tucker with securing him the role of Agarn.

“I was supposed to be the sergeant,” Mr. Storch said, “but when they saw Forrest Tucker dressed in a cavalry suit — he looked like a polar bear — they said, ‘That’s going to be it.’ And Forrest Tucker said: ‘Wait a minute. I’m going to need a corporal around here, and I think he and I would have good chemistry.’” The “he” was Mr. Storch.

When not clowning around on the stage or screen, Mr. Storch was party to an unusual secret at home. Before he and his wife, Norma Greve, were married in 1961, she had had a biracial daughter, Ms. Cross, with a Black performer named Jimmy Cross. Mother and child left Mr. Cross soon after June’s birth in 1954, but since the girl was dark-complexioned enough that she could not pass as white, she and her mother began encountering racism. When June was 4, Norma asked friends, a middle-class Black couple in Atlantic City, N.J., to raise her.

Later, when the Storches were married and living in Hollywood, June would come to visit, and they would explain to friends that she was an abused child of former neighbors and that they had adopted her, but that she lived most of the year with Black friends.

“In those days, people were encrusted in prejudice,” Mr. Storch explained to People magazine in a 1996 interview. “We saw no reason to rock the boat.”

June Cross later became a television producer and then a professor at Columbia University. In 1996 she told her story in “Secret Daughter,” a documentary broadcast on PBS, which won an Emmy Award.

The personal story of Mr. Storch and his wife has another wrinkle as well. In 1948, years before they were married, they had a daughter, whom they put up for adoption. After Ms. Cross’s documentary came out, the Storches and that daughter, Candace Herman, were reunited.

Lawrence Samuel Storch was born on Jan. 8, 1923, in Manhattan. His father, Alfred, is described in several biographical listings as a real estate agent, though in a 1983 interview with The Washington Post Mr. Storch said he was a cabdriver. His mother, Sally (Kupperman) Storch, was a telephone operator who later had a jewelry store and ran a rooming house.

Ms. Cross, in a telephone interview, said that as a child Mr. Storch would pick up voices and accents from the rooming house guests (Orson Welles, he always said, was one) that served him well later as a comedian.

Mr. Storch left high school during the Depression when he found that he could make a few dollars doing impressions in the city’s clubs and acting as M.C. for vaudeville shows. He served in the Navy during World War II. By the time television came along, he was a well-established comic in the city and had used his mimicry skills to gain a foothold in radio.

He first came to the attention of television audiences in 1951 as a guest host of “Cavalcade of Stars,” and in 1953 CBS picked him to host the summer replacement show that filled Jackie Gleason’s Saturday night slot. A string of television appearances followed, including a recurring role on “Car 54, Where Are You?” Mr. Storch was also the voice of the TV version of Koko the Clown in scores of cartoon shorts, and teamed with his friend Don Adams as one of the voices in the 1963 cartoon series “Tennessee Tuxedo and His Tales.”

Then came “F Troop,” which brought Mr. Storch an Emmy nomination in 1967. He worked steadily in television through the 1980s, doing guest spots on “The Flying Nun,” “The Love Boat,” “Love, American Style” and numerous other shows. In 1975 he reunited with Mr. Tucker in a live-action children’s show called “The Ghost Busters,” in which the two men played detectives who searched for spooks. (The show was unrelated to the later “Ghostbusters” movies.)

One of Mr. Storch’s Navy friends was a fellow sailor named Bernard Schwartz, who became better known as Tony Curtis and gave Mr. Storch roles in several of his films, including “40 Pounds of Trouble” (1962), “Sex and the Single Girl” (1964) and “The Great Race” (1965).

Mr. Curtis and Mr. Storch teamed up again years later, in 2002, in a stage musical version of “Some Like It Hot,” the 1959 Billy Wilder movie that had starred Mr. Curtis, Jack Lemmon and Marilyn Monroe. (The show drew upon the 1972 Broadway musical “Sugar” and added new material.) Mr. Curtis played not his original role, a musician on the run from gangsters who joins a band disguised as a woman, but the millionaire Osgood Fielding; Mr. Storch played the band manager, Bienstock.

That show, which toured the country, never made Broadway, but Mr. Storch had a half-dozen Broadway appearances to his credit, beginning with “The Littlest Revue,” a 1956 show that also starred Joel Grey. In 1958 he appeared in the play “Who Was That Lady I Saw You With?,” and he had roles in revivals of “Porgy and Bess” (1983), “Arsenic and Old Lace” (1986), “Annie Get Your Gun” (2000) and “Sly Fox” (2004). His other films included Blake Edwards’s “S.O.B.” and the disaster movie “Airport 1975.” His vocal talents turned up in numerous cartoons as well as in McDonald’s commercials (“the most money I ever made,” he said in 2009).

Mr. Storch’s wife died in 2003. His brother, Jay, an actor who used the name Jay Lawrence, died in 1987. In addition to Ms. Cross and Ms. Herman, he is survived by a stepson, Lary May, the author of several books on film and popular culture; five grandchildren; and four great-grandchildren.

Mr. Storch was still making public appearances late in life. In June 2014 he served as mayor for a day of Fort Lee., N.J., a town where he had once performed. That September he appeared at the Comedy Store in Los Angeles and was honored with a star on the Palm Springs Walk of Stars.

In 2016 he was honored by Passaic, N.J., the city the fictitious Corporal Agarn called home. Mayor Alex Blanco said at the ceremony that Passaic had been mentioned all over the world because of “F Troop”; Mr. Storch said that he had never been there before, but that he had chosen Passaic for his character’s hometown because “it sounded tough.”

In his later years Mr. Storch maintained an active Facebook page and posted videos on TikTok. He also put in appearances at Wild West City, a western-themed attraction in Stanhope, N.J. In July 2021, at 98, for what was billed as his final public appearance, he toured the site in a sporty red sedan, hamming it up for onlookers.

Mr. Storch could sometimes be seen playing the saxophone, a lifelong hobby, in Central Park. Another signature activity, even late in life, was standing on his head. “It helps your breathing,” he explained in 2002 to a reporter for The Detroit News, while standing on his head. “The blood goes to your brain, whatever brain you have.”

- Advertisement -
This post contains affiliate links. If you use these links to buy something we may earn a commission. Thanks.”
Facebook
Twitter
Pinterest
WhatsApp
Previous articleVicky Kaushal shows off his beard days after Katrina Kaif dropped him a hint
Next articleMahesh Babu-Trivikram Srinivas reunite for upcoming project SSMB28, film arrives in theatres in 2023