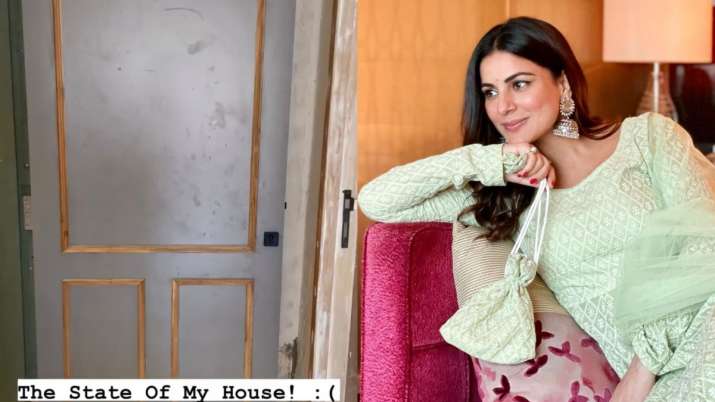 Kundali Bhagya fame Shraddha Arya who is seen playing the role of Preeta in the show recently bought herself a new house in Mumbai. The reason behind making this hefty purchase was the fact that the actress wanted to stay close to her parents. She was super excited to get the interiors of her house done which is why she hired an interior designer for the same. However, she was shocked when the designer she chose conned her and ran away with her money. The ordeal was shared by Shraddha on her Instagram handle where she expressed her anger and informed everyone about the same. Not only this, but she even posted several pictures of not just the designer’s profile but also the condition of her house post the robbery.

Sharing the story alongside the screenshot, Shraddha wrote, “The interior designer I thought I can trust has broken things in my house and run away with the fittings and other material after I had paid 95% of the amount that he himself quoted me. Can’t believe this happened to me while I was away.”

One again, she shared a glimpse of her house which was all set to be renovated and wrote alongside, “The state of my house 🙁 Nevermind will begin again (sic)”

Shraddha, during an interview with ETimes revealed, “I was looking for an interior designer online that’s when I found him. I hired him to do my house after I got married in November last year. He had promised to finish the work in four months but it took longer than that. The amount he quoted was in lakhs and I have already paid him around 95% of that. Now he has gone away with my money as well as all the material that I had bought for the house.”

Later, the 34-year-old actress lauded the power of social media and informed, “I can’t thank my fans, followers, the journalists, and everyone who came out to support me in the matter of my new house, enough. With the support of all of you, I have got my fittings and fixtures back with an apology from the interior designer. Lesson learned: Never leave your work site unattended. My take away from the incident: In all these years of work in the industry, what I have really earned is the support of all my well-wishers. Forever Grateful!”

On the personal front, Shraddha got married to her husband Rahul Nagal in November last year. Ever since she has been enjoying marital bliss and sharing pictures and videos of the same on Instagram.

For those unversed, Shraddha is a popular face of the TV industry and has worked in shows like– Main Lakshmi Tere Aangan Ki, Tumhari Paakhi, and Dream Girl. Apart from this, she has even been a part of Ram Gopal Varma’s Nishabd and Shahid Kapoor-starrer Paathshaala.