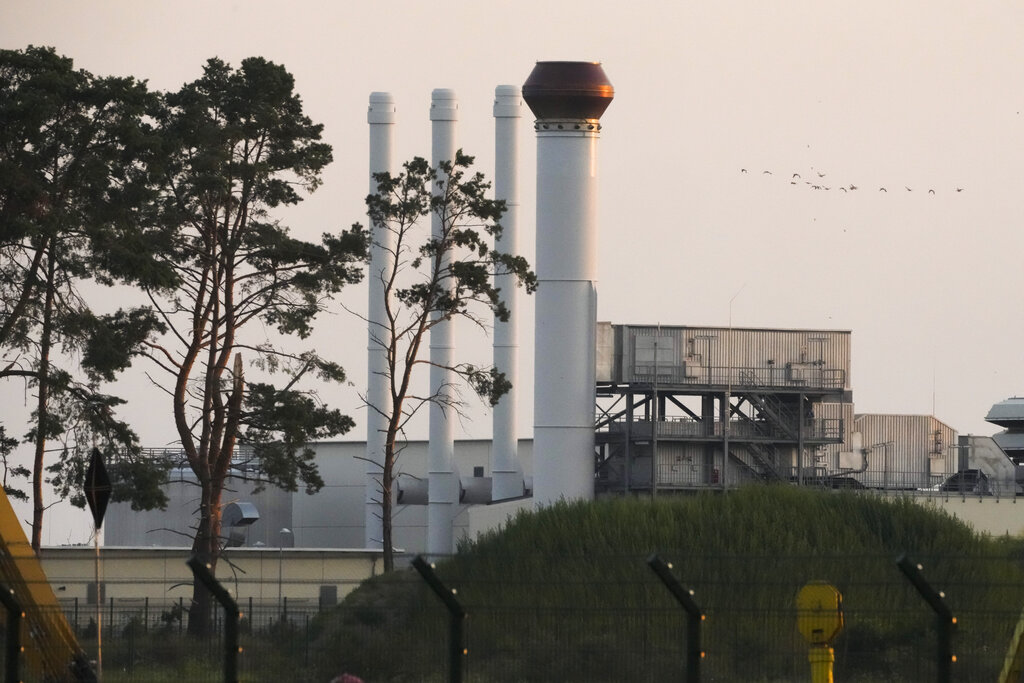 Key Gas Pipeline From Russia to Europe Restarts After Break

BERLIN (AP) — Natural gas started flowing through a major pipeline from Russia to Europe on Thursday after a 10-day shutdown for maintenance, the operator said.

But the gas flow was expected to fall well short of full capacity and the outlook was uncertain — which leaves Europe still facing the prospect of a hard winter.

The Nord Stream 1 pipeline under the Baltic Sea to Germany had been closed since July 11 for annual maintenance work. Amid growing tensions over Russia’s war in Ukraine, German officials had feared that the pipeline — the country’s main source of Russian gas, which recently has accounted for around a third of Germany’s gas supplies — might not reopen at all.

Deliveries were expected to fall far below the pipeline’s full capacity, as they did for weeks before the maintenance break.

The head of Germany’s network regulator, Klaus Mueller, said Russia’s Gazprom had notified deliveries Thursday of only about 30% of the pipeline’s capacity. He later tweeted that actual deliveries were above that amount and could reach the pre-maintenance level of some 40%.

That wouldn’t be enough to resolve Europe’s energy crisis. “The political uncertainty and the 60% reduction from mid-June unfortunately remain,” Mueller wrote.

When Gazprom reduced the flow last month, it cited alleged technical problems involving equipment that partner Siemens Energy sent to Canada for overhaul and couldn’t be returned because of sanctions imposed over Russia’s invasion of Ukraine.

The Canadian government earlier this month gave permission for the turbine that powers a compressor station at the Russian end of the pipeline to be delivered to Germany.

The German government has rejected Gazprom’s technical explanation for the gas reduction, charging repeatedly that it was only a pretext for a political decision to sow uncertainty and further push up energy prices. It has said the turbine was a replacement that was only supposed to be installed in September, but that it’s doing everything to deprive Russia of the pretext to reduce supplies.

Russian President Vladimir Putin said Tuesday that Gazprom still hadn’t received the relevant documents for the turbine’s return, and on Wednesday questioned the quality of the repair work. Putin said that Gazprom was to shut another turbine for repairs in late July, and if the one that was sent to Canada wasn’t returned by then the flow of gas would decline even further.

The head of the European Union’s executive Commission, Ursula von der Leyen, said on Wednesday that the turbine was “in transit” and there was “no pretext not to deliver” gas.

The Commission proposed that member countries cut their gas use by 15% over the coming months as the bloc braces for a possible full Russian cutoff of gas supplies.

Germany and the rest of Europe are scrambling to fill gas storage in time for winter and reduce their dependence on Russian energy imports. Germany has Europe’s biggest economy; gas is important to power its industries, provide heating and, to some extent, generate electricity.

Last month, the government activated the second phase of Germany’s three-stage emergency plan for natural gas supplies, warning that Europe’s biggest economy faced a “crisis” and winter storage targets were at risk. As of Wednesday, Germany’s gas storage was 65.1% full.